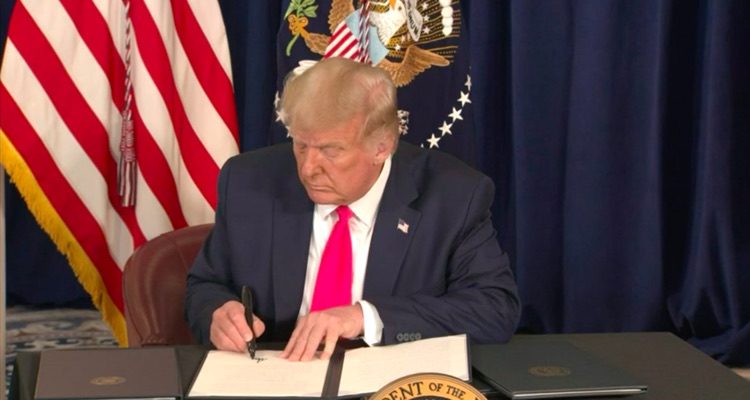 26 U.S. States have already been approved to receive $300 weekly federal unemployment benefits, according to the U.S. Government.  Others are in the application process.

The $300 weekly federal unemployment checks were authorized by an emergency executive order granted by President Donald Trump earlier this month.  The orders were issued because of a prolonged disagreement between members of Congress, with both Senate Republicans and House Democrats unable to agree on a second stimulus package.  States now have the option of adding $100 from their own budgets, for a $400 weekly addition to existing state checks.

The executive order will draw on funds from the Federal Emergency Management Agency, or FEMA.  The executive order has quickly started the ‘Lost Wages Supplemental Payment Assistance‘ program, which has earmarked $44 billion from the Disaster Relief Fund for lost wage payments.  That’s good news for millions of Americans battling unemployment, including those within hard-hit sectors like live concerts and entertainment, tourism, and a range of service-related industries (among many others).

So far, 26 U.S. states have been approved to receive the additional unemployment relief, with each state having the option to add $100 from their own budgets.

Once funds have been distributed from FEMA, it’s unclear how quickly states can distribute those funds to its citizens. But it looks like Arizona is already starting its distribution efforts.

Beyond that, 10 states have submitted applications, or expressed their intent to file applications.

Those states are: Arkansas, Connecticut, Maine, New Hampshire, Ohio, Pennsylvania, Virginia, Washington, West Virginia, and Wyoming.  In all likelihood, every single applicant will be approved to receive funds from the $44 billion tranche allocated by the emergency executive order.

At this stage, it’s unclear which states will add the $100, though at least one state — New York — has balked at the additional requirement.  Kentucky, Montana, and West Virginia have indicated that they will add the extra $100 in funds. Previously, the Trump Administration required states to commit to the $100 payment as a condition of receiving the $300 supplement. But that requirement was dropped following blowback from various U.S. governors.

At the time of this writing, 13 U.S. states and the District of Columbia have yet to apply for the funds.

Those 15 states are Delaware, Florida, Hawaii, Illinois, Kansas, Minnesota, Nebraska, Nevada, New Jersey, North Dakota, Oregon, South Carolina, and Wisconsin.  Additionally, the District of Columbia has not applied, but is eligible to receive the federal unemployment enhancement even though it is not a U.S. state.  We will update this article when those states apply, and also indicate when applications have been approved.

One lone state — South Dakota — has declined to receive any federal unemployment assistance.

The reason: they simply don’t need it because they didn’t shut down their economy. “South Dakota’s economy, having never been shut down, has recovered nearly 80% of our job losses,” said South Dakota governor Kristi Noem. “South Dakota is the only state in the nation that didn’t have extended benefits kick in because our insured unemployment rate has been the lowest in the nation.”