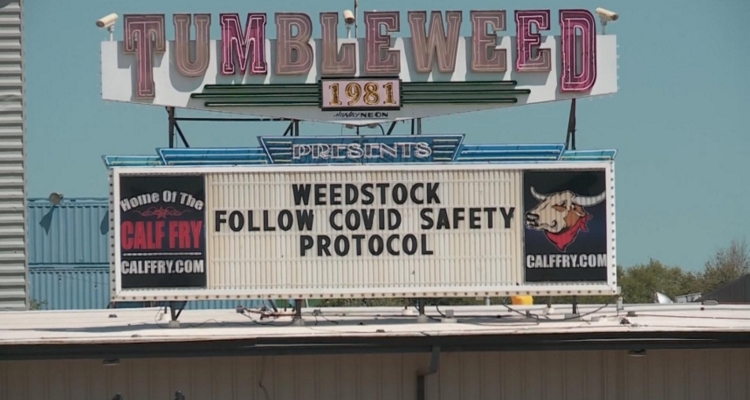 The annual Weedstock Festival is held every year in Stillwater, Oklahoma. Thousands of people flock to attend the three-day gathering about 60 miles west of Tulsa. The festival is held at the Tumbleweed Dance Hall and featured three days of live music.

Tumbleweed Dance Hall says it is “committed to following the CDC guidelines on social distancing and face covers and personal hygiene. It asked attendees to do their part to keep others safe.” But that didn’t happen, according to some of the performers who attended Weedstock this year.

Singer Parker McCollum, who would have headlined Friday’s show, cancelled his appearance. He later tweeted that he had tested positive for coronavirus.

“After realizing this morning that I could not taste or smell anything at breakfast, I went to get tested for COVID. Results came back showing I was positive for the virus,” he confirms. “My deepest apologies to the fans and venues who were counting on me to perform. I absolutely believe that the shows should go on, and I wish more than anything I could be there to play them.”

Stillwater Mayor Will Joyce revised the city’s emergency declaration. It placed further limits on how many people can be inside bars and nightclubs at once. Tables and chairs should be at least six feet apart, and dance floors must remain closed. Masks are required and must be worn at all times, according to the emergency declaration. Joyce has said he doesn’t believe it’s the right time to host a music festival.

“Because it’s outside the city limits, city officials have reached out to Tumbleweed management, talked with Payne Co Commissioners, Pay Co Health and others about this event. It is not the right time for thousands of people to gather for a three-day music festival,” he tweeted.

The owner of the Tumbleweed told the city’s Chamber of Commerce that the Weedstock festival “had to happen.”

“We either put this thing together or we just shut the doors for good,” Cary McBride, owner of the Tumbleweed, told the local Stillwater newspaper. The Tumbleweed has already canceled another major music festival this year. The festival went ahead and ended on Saturday, with few attendees wearing masks.

So despite the headliner bowing out due to COVID-19 and increased restrictions, the show must go on. Officials are worried the gathering may strain the local healthcare system within the coming weeks.