Despite Streaming, US Recorded Music Revenues Still Down 50% From 1999 Peaks 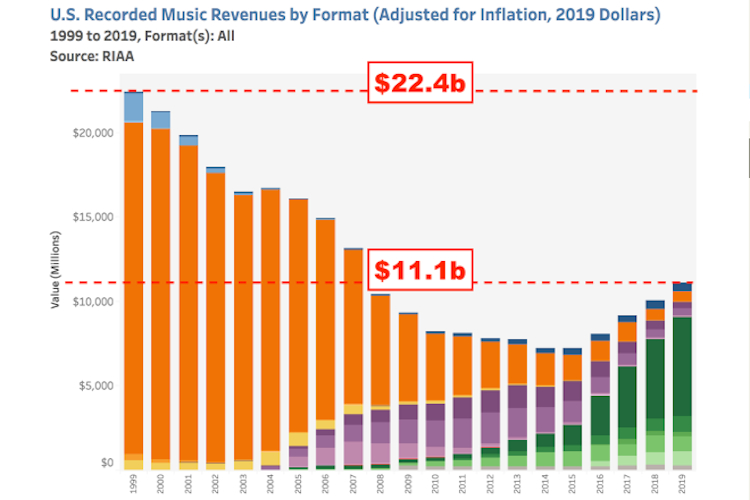 Despite the prevalence (and continued growth) of streaming, U.S. recorded music revenues are down about 50 percent from 1999’s peak.

The Trichordist, an artist-rights blog created by Cracker frontman David Lowery, recently shed light upon the shocking statistic. Compiled annual data from the Recording Industry Association of America (RIAA) shows that U.S. recorded music revenues exceeded a whopping $22.4 billion in 1999, before dropping each year until 2014 (save for a slight rebound between 2003 and 2004).

Since 2015, recorded music revenues have experienced year-over-year growth in America, but the figure touched just $11.1 billion in 2019 – less than half of the 1999 peak.

Undoubtedly, the data raises serious questions about exactly how much revenue music streaming brings in – and, more importantly, how much of the income ultimately reaches artists.

According to the Trichordist, streaming’s “fundamental problem…is that revenue does not grow with consumption.” In this way, the analysis specifies that heavily-streamed, big-name artist releases serve to further divide (and exhaust) the limited amount of capital that platforms distribute to rightsholders. Consequently, per-stream compensation is driven down because plays increase at a much quicker rate than earnings, potentially hitting up-and-coming artists the hardest.

Also worth mentioning is the always-increasing size of streaming services’ libraries.

While exploring the technical nuances and success factors of the songs on Spotify’s RapCaviar playlist, we mentioned that the leading music streaming service adds nearly 300,000 tracks to its library weekly, or roughly 15 million songs annually. Additionally, DMN was first to report on Spotify’s Q2 2020 financial performance, including a two percent boost in overall quarterly income, as well as an 11 percent downturn in cash generated by ad-supported accounts. Both these points – and the larger implications of a flat subscription fee and variable ad-based income – provide more context yet to the 50 percent drop in overall recorded music revenues that the last two decades have brought with them.

Many artists and fans are voicing their opinions of streaming revenue under the #FixStreaming hashtag.

“A million Spotify streams in Ireland gets you approx $4,571.97 (€3,864). That’s the same as approximately 400 CDs or 200 vinyl records. The game is up,” wrote one individual, whose message also included the aforementioned hashtag.

On Tuesday, we reported that Spotify and YouTube were cracking down on millions of “fake” streams garnered by BTS’s first all-English track, “Dynamite.” The plays in question appeared to derive largely from diehard fans’ repeat-streaming habits (not bots), leading some to ask whether the adjustments were fair.

And specifically on the topic of streaming-service revenue, Kobalt Music subsidiary AWAL made headlines for stating that “hundreds” of its artist take home $100,000 or more from streaming annually – and, equally as notably, that a surprising number of its signed acts earn over $1 million from streaming each year.

Lastly, Spotify CEO Daniel Ek recently offered some controversial advice to artists who are unhappy with the royalties they’re receiving from his platform: work harder and release more music.

The music community responded with advice of its own.