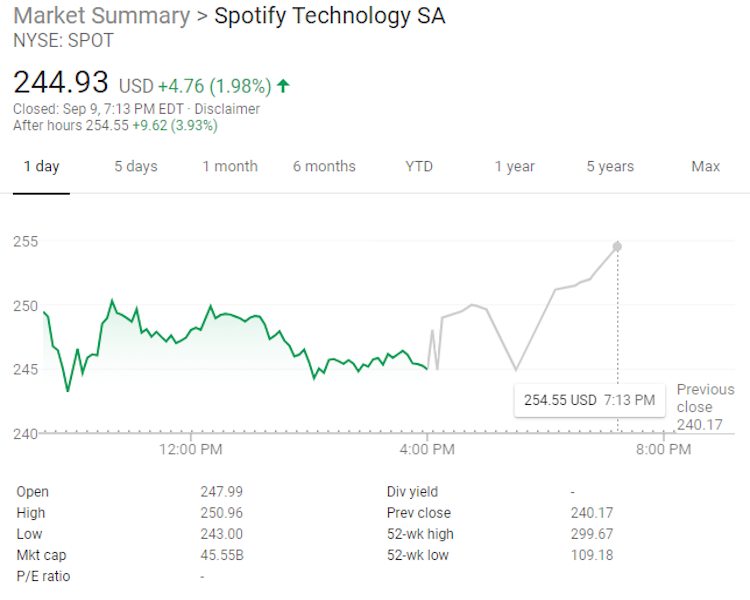 Spotify stock suffered a more than $13-per-share dip on Friday (9/4), falling over 5% (to $248.21) from Thursday’s close as part of a more than $40 decrease since midweek. That loss continued on Tuesday (9/8), with a total stock plunge of $52 in just 4 trading days. However, shares jumped back into the $255 range on Wednesday (9/9) – seeming to demonstrate significant volatility in the process.

That slide continued on Tuesday, with shares tanking another $8.19, or 3.3% in post-Labor Day trading.  Factoring from the near-$292 high that the stock crossed on 9/1, when The Joe Rogan Experience debuted on Spotify, SPOT parted with roughly $43.79 in per-share worth on the week and more than $52 over the latter four trading sessions.

After losing 18% of its value in less than one week (compared to a 5.7% Dow Jones Industrial Average slip and a 10% NASDAQ decrease during the same span), however, SPOT rebounded in a big way on Wednesday, September 9th. Shares rested at $244.93 apiece when the market closed – a nearly 2% increase from Tuesday – and, at the time of this writing, had rallied by another 4% (almost $10 each) during after-hours trading.

These noteworthy fluctuations – a 20 percent dip, an immediate one-day increase, and a high volume of after-hours trades – may be indicative of market volatility driven by fundamental investor uncertainty as to Spotify’s long-term potential.

From January to August of 2020, SPOT nearly doubled in worth, with the rise having started after the platform became the official home of The Joe Rogan Experience. Once again, the podcast only debuted on Spotify at the start of September – leading some to suggest that the preceding all-time-high prices resulted more from hype than concrete results.

To be sure, we covered multiple financial firms’ sizable SPOT target prices, which ranged from $280 to $320. However, other financial professionals took a more bearish view. Bernstein, for instance, upped its target price to just $172 and said: “We continue to believe it’s unlikely Spotify will generate much earnings from podcasts.”

While it’s unclear exactly what prompted the initial selloff among investors in the Stockholm-based platform, the falloff may have had something to do with Rogan’s rocky arrival on Spotify.

Building upon the point, Digital Music News was first to report on Tuesday (9/2) that several JRE episodes were missing from Spotify. That includes most, but not all, involving controversial guests. As one might expect, longtime fans were irate, with many calling Rogan a $100 million sellout. (Other podcast deals’ financial terms are unclear, but needless to say, agreements with Kim Kardashian West, WarnerMedia, and others are undoubtedly multimillion-dollar investments.)

Alex Jones, whose JRE episodes were removed, subsequently attributed the happening to a file-transfer hang-up. “They’ve got 1500+ files and then some migrating over, and they’ve had a few problems here and there with corrupted files, with the naming of them,” Jones relayed.

Jones also specified that 100 of Rogan’s favorite episodes would remain on YouTube even after the podcast becomes exclusive to Spotify later this year.

Nevertheless, the conspicuous absence of some JRE episodes on Spotify raises several interesting questions, including whether the longtime UFC commentator’s loyal collection of fans will stick by him through the transition.

It’s also possible that the investors who cashed out of SPOT were pondering a pair of different, more pressing inquiries: Will Rogan still be able to welcome all the guests of his choosing? And just as importantly, will Spotify be willing to host the audio and video from these potentially contentious episodes?

Beyond the Rogan imbroglio, traders may be dumping Spotify in fears of a massive overvaluation. Other investors, like the aforementioned firms banking on a $320-per-share price, may be simultaneously acquiring SPOT – hence the back-and-forth price movements.

Additionally, Spotify’s CFO claimed that the platform could be profitable, but that its aggressive growth strategy emphasizes continual investments in new assets (like podcasts) and technology. Though potentially beneficial in the long term, the business model may have spooked some shareholders who’re most immediately concerned with quarterly performances.

Then, there’s the Apple problem. For months, Spotify has been engaged in an antitrust legal battle with the tech behemoth, and gaining little ground. Meanwhile, Apple has been aggressively pursuing its bundled media strategy, and accelerating the growth of Apple Music.

That’s quite a thick soup, though the reasons for the above-described plunge and one-day gains will present themselves in the coming months. Evidence suggests this information will greatly impact Spotify’s future market valuation.