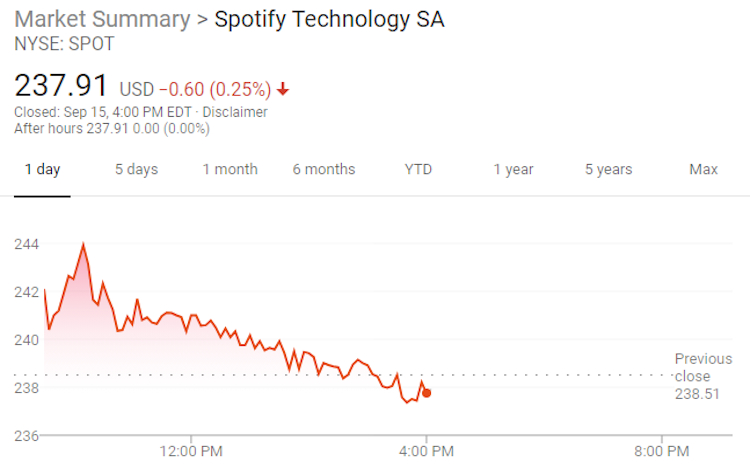 Spotify stock (SPOT) has touched several all-time-high prices this year – and dipped substantially from these record valuations. Here’s a breakdown of what experts believe the remainder of 2020 holds for the leading music streaming platform’s per-share value.

Update (9/15): Spotify stock fell .25 percent on the day, with its per-share price resting at $237.91 when the market closed. This value is SPOT’s lowest since June, and notably, shares approached $244 apiece shortly after trading began and declined steadily thereafter – possibly suggesting that some investors cashed in ahead of an anticipated downturn.

On the heels of a dip into the $250 range during August, Spotify stock jumped past $290 per share on September 1st, when The Joe Rogan Experience became available to listeners (albeit with certain episodes missing). It seems that a portion of investors were waiting until JRE’s arrival to cash in, for SPOT declined to $240.02 just one week later and below the mark another week after that.

Throughout the unprecedented ascent (and occasional downward movement) of Spotify stock, financial analysts have offered their stances on the shares’ future.

Here’s a quick summary of those ratings and price targets (from highest to lowest).

Needless to say, the variance between these Spotify stock target prices – a whopping $148 separates the highest (RBC Capital) and the lowest (Bernstein) – is indicative of the varied opinions investors have of the company’s future.

Spotify stock started 2020 at about $150 per share, which marked a modest increase from November of 2019 and, more significantly, an approximately $35 uptick from September of the same year.

SPOT hovered around this mark (and dropped as low as about $140 per share) through February and some of March. That was until the COVID-19 pandemic sent shares crashing below $120.

April (and particularly its final week) brought with it major Spotify stock gains, and shares exceeded $151 – effectively regaining the worth they lost amid the pandemic in about six weeks. Things held mostly steady until May’s latter ten days, as Spotify announced on the 19th that it would become the exclusive home of The Joe Rogan Experience.

Following the unveiling of this (reportedly $100 million) deal, shares climbed to a whopping $193 apiece before settling at around $180 to begin June. The ascent was hardly over, however, for SPOT approached $270 before the month’s end. July ushered in a peak as Spotify stock broke another all-time-high record of $291 per share, as well as a dip into the $250s.

This downturn continued until August’s last day, when shares again broke $291 apiece, on the eve of The Joe Rogan Experience’s arrival on Spotify. One week after the fact, though, SPOT had parted with $50 in per-share worth, and the decrease has proceeded through mid-September.

Many have attributed the initial gains to the Stockholm-based company’s high-profile podcasting investments. Spotify stock landed at about $150 per share at the end of April. But following the May 19th announcement that the service would become the exclusive home of The Joe Rogan Experience, shares quickly hiked into the $180 ballpark. By June’s end, this per-share worth had swelled by nearly $100 more; the month saw Spotify unveil exclusive deals for podcasts from Kim Kardashian West and the DC Comics world.

July, for its part, was accompanied by the arrival of The Michelle Obama Podcast, an agreement for a program from TikTok star Addison Rae, and continued market success.

Moving forward, we’ll continue to update this piece with the latest expert opinions on SPOT, to better chart the shares’ future in 2020 and beyond.