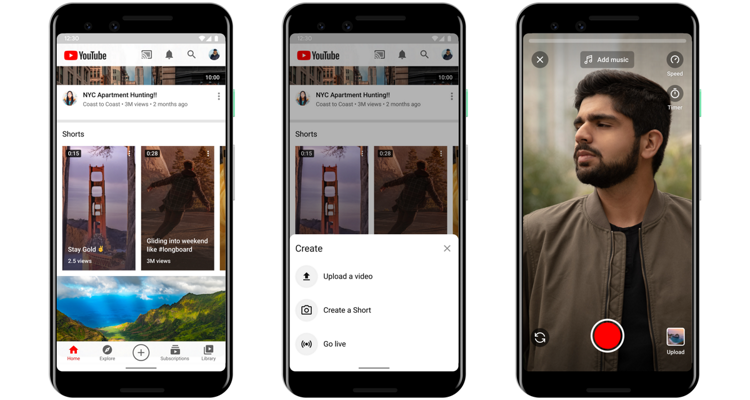 The new feature allows YouTube users in India to upload 15-second clips and to edit them. Those tools include a multi-segment camera tool, speed controls, a timer, and a countdown feature. All of these tools feature prominently in the short-form video creation app, TikTok. Videos in YouTube Shorts can be set to music, using YouTube’s library of licensed songs.

Facebook pulled a similar move after India banned TikTok earlier this year. Instagram’s Reels feature launched in India, shortly before rolling out to the rest of the world. Instagram Reels now features prominently in the app, replacing the search button with a TikTok-like ‘Discover.’

YouTube says the Indian rollout of YouTube Shorts is a beta of sorts. “We’ll continue to add more features and expand to more countries in the coming months as we learn from you and listen to your feedback,” the official blog post reads.

YouTube also received an update to highlight short-form videos. “Today we’re also introducing a new watch experience that lets you easily swipe vertically from one video to the next and discover other similar short videos. We’re also going to make it even easier to start watching Shorts.”

YouTube says it will continue to roll out more creation tools over the next few weeks and months.

The choice of country is no accident: TikTok is officially banned from India, making it a great testbed. Meanwhile, the future of TikTok in the United States hangs in the balance. ByteDance accepted a bid from Oracle to become its official US partner – but that deal is still subject to US government approval.

YouTube’s commitment to short-form video shouldn’t be too surprising to anyone paying attention. Earlier this year, the video platform announced plans to test short-form videos. At the time, YouTube said it would test recording 15-second videos among a small group of creators on iOS and Android. Now it looks like YouTube is ready to expand that beta to a wider audience.

YouTube Shorts creators will have access to hundreds of tracks from partners like T-Series and Believe Digital. The video platform is also working with other music artists, labels, and publishers to make their content available in the YouTube Short’s catalog. YouTube says the feature will roll out to the rest of the world after an expanded beta in India.