50 Members of Congress Demand a Second Stimulus Check for Americans 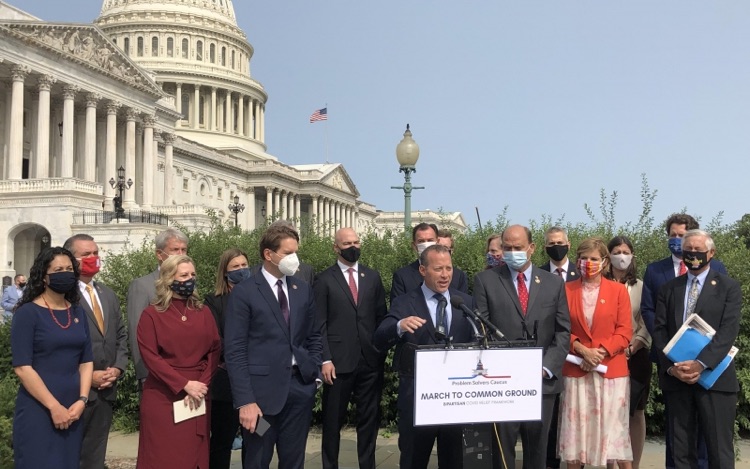 A 50-member group of Democrats and Republicans are now fighting to keep a coronavirus relief package alive — including a second stimulus check for Americans.

As Congressional deadlock continues over a coronavirus relief package, there’s still hope for a second stimulus check. Despite endless bickering between Democratic and Republican party leaders, a renegade group in Congress is now aiming to break the logjam.

The ‘Problem Solvers Caucus‘ — which currently counts 25 Democrats and 25 Republicans — has emerged in the House of Representatives and has already drafted a compromise coronavirus relief package. On Tuesday, members of the Caucus floated a $1.5 trillion relief proposal that would include second stimulus checks for Americans. That falls between a $2.2 trillion relief package by Democrats, led by Nancy Pelosi, and a $1.3 trillion compromise recently offered by Republicans.

The possibility of breaking the logjam is good news for millions of Americans, especially those from hard-hit sectors.  That includes live performance and indoor entertainment, both areas that have been completely grounded for months.  Others from healthier industry sectors have also been impacted, however, as companies cautiously tread forward in 2020.

The details of the $1.5 trillion compromise bill are largely unknown at this stage — but a second stimulus check is definitely part of the proposal.

Members have disclosed that the bill contains a $1,200 stimulus check for qualifying adults earning under $75,000 annually.  There’s also a $500 payment per child per household, as well as a $500 credit for adult dependents. It’s unclear if Americans making over $75,000 per year would qualify for reduced payments.

The bill also calls for bigger federal unemployment checks. Initially, the federal government boosted state unemployment checks by $600 a week. But Congress was unable to agree on a continuation of that program into August. With little signs of a resolution, President Trump issued an emergency executive order authorizing $300 weekly enhancement checks (with states having the option of adding an additional $100 more).

The compromise plan also includes provisions for a third stimulus check if needed, as well as ‘boosters’ and ‘reducers’ depending on the pace of economic recovery.

Other provisions include legal liability protection for reopening businesses, something Democrats have largely rejected (a summary of the bill’s framework can be found here).

“In light of the urgent needs facing millions of Americans, families, and small businesses, the framework is designed for a six-month horizon and through the next inauguration, except for state and local funding, which extends for a full year.

Separately, Trump is also demanding that a second stimulus check be mailed to Americans. But the President generally lacks the authority to issue emergency budget orders without Congressional approval.

Many of the members of the Caucus are from battleground states and districts.

Legislators from less-contested regions, including Democrats like Nancy Pelosi from California, may feel less pressure to act on stimulus legislation. But Republicans are also slamming Pelosi for intentionally blocking a coronavirus relief package to damage President Trump’s reelection chances. That was recently alleged by Treasury Secretary Steven Mnuchin this week, who questioned why Democrats like Pelosi seem disinterested in forging any compromise.