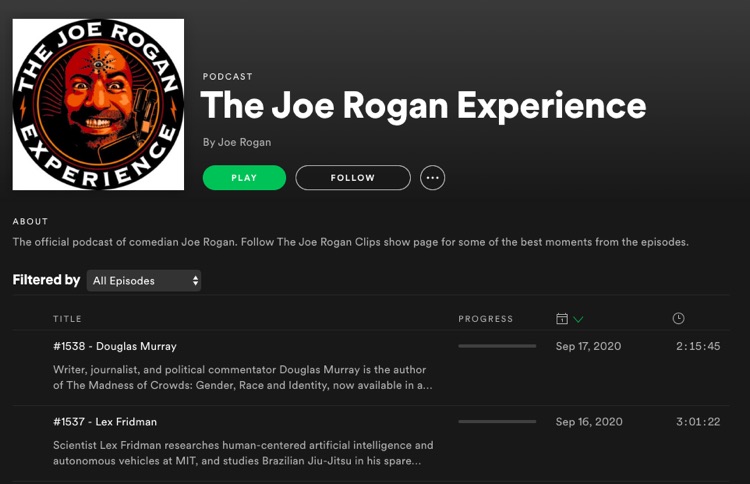 The Joe Rogan Experience on Spotify

During a series of recent company meetings, multiple Spotify employees reportedly demanded that the platform remove additional episodes of The Joe Rogan Experience due to their controversial guests and/or conversations.

Vice first reported on these contentious internal exchanges, which sources indicated have taken place across ten separate sit-downs thus far. Spotify CEO Daniel Ek has reportedly been on hand for at least one of the discussions, working to quell team members’ criticism over the continued on-platform availability of several Joe Rogan Experience episodes. According to attendees, Ek has also implored staff not to leak the meetings’ details.

That word of the long-running dialogue is circulating appears to suggest ongoing disagreement between Spotify workers and execs. Moreover, one of the JRE episodes reportedly at the center of the controversy – a mid-July conversation with author Abigail Shrier, who penned a book entitled Irreversible Damage: The Transgender Craze Seducing Our Daughters – is still available on Spotify presently.

Nevertheless, the heated confrontation seems to intimate that the Joe Rogan Experience episodes missing from Spotify may not make their way onto the platform after all. Alex Jones, whose JRE episodes have yet to arrive on the service, previously attributed the absence to technical difficulties. But with the additional context of the above-mentioned meetings, it appears that these installments might have been intentionally – and permanently – omitted from the transition.

The lost conversations are still drawing the ire of more than a few dedicated fans.

Rogan specified upon announcing the multimillion-dollar deal that Spotify wouldn’t be involved in his podcast’s creative process. And on a broader scale, others are suggesting that the issue may come to a head when the longtime UFC commentator looks to book future guests – potentially threatening the exclusive Spotify agreement.

Many believe that The Joe Rogan Experience’s immense popularity is rooted in the raw, unfiltered nature of the conversations it delivers from a variety of individuals. (Past guests have included a number of politicians and political commentators, scientist Neil deGrasse Tyson, and artist Post Malone, to name just some.) And needless to say, compromising this unique, all-encompassing format, in terms of guests and/or specific conversations, could dissuade listeners and viewers from tuning in.

On the other side of the coin, Spotify’s opting not to remove the Abigail Shrier JRE episode (in spite of the reported employee pushback) might reflect a desire to maintain a relatively strong professional relationship with Rogan. SPOT ascended substantially during the week following the announcement of the JRE deal; even after factoring for recent losses, the company’s per-share worth is about $85 higher than it was at 2020’s start.

Lastly, Rogan himself has been conspicuously silent about the missing episodes and the Spotify deal – possibly because of ongoing behind-the-scenes talks.