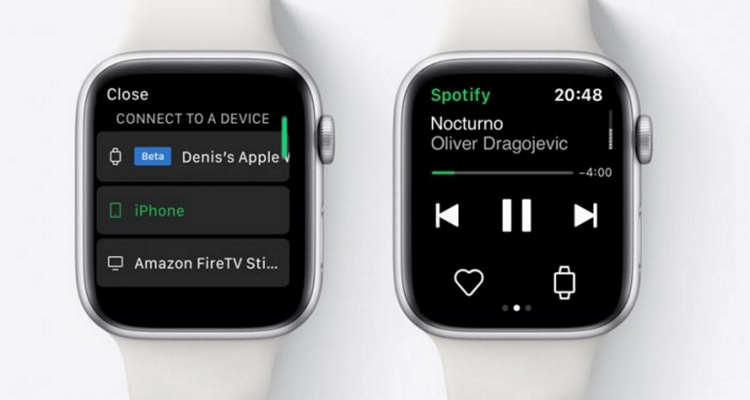 Now that the Apple Watch Series 6 is here, Spotify appears to be taking its Apple Watch app seriously.

Spotify’s antitrust complaints with the EU have brought some changes, though. After Apple opened Siri to third-party music services, Spotify updated the app to support the voice assistant. But it still lags behind competitors like Apple Music and Pandora – which offer Watch-based music streaming.

Some users in Germany received an update to their Apple Watch with new music streaming features.

Who gets the update doesn’t appear to correlate between iOS/watchOS version. Those who have the Spotify feature see a blue beta icon, signifying its a test for now. Those with the new feature also report the Watch being able to stream to connected Bluetooth headphones and the built-in speaker.

Spotify is paying closer attention to its Apple Watch strategy as a new generation of wearables launches.

But it also argues that Apple’s streamlined subscription strategy is another antitrust problem. Spotify says bundling Apple Music with other core iOS services makes its music streaming less appealing to iOS and macOS users. That’s a complaint that will likely play out in EU courts, as Apple racks up antitrust headaches in the continent.

Apple is also facing antitrust accusations from Match Group, Tile, and Epic Games. The Epic Games/Fortnite battle is playing out in an ugly match pitting gamers against their smartphone platform. Apple’s latest argument is that Fortnite is losing players left and right, and this stunt is to keep it in the public spotlight.

Either way, Spotify is amassing quite a collection of allies in its antitrust battle against Apple. But it has taken Spotify nearly two years to give its Apple Watch app basic functionality available from other music services. That’s not Apple’s fault; the blame for that rests squarely on Spotify’s shoulders. Even now, there’s no guarantee this test feature will ever make it into a public build.

Spotify is well-known for testing new features with a small subsection of the Spotify user base. Last week, reverse engineer Jane Wong discovered a new karaoke feature that may or may not be launching this year. The point is, Spotify’s working on it – but don’t expect it any time soon.