Spotify Stock (SPOT) Down More Than 20% In September — What’s Going On? 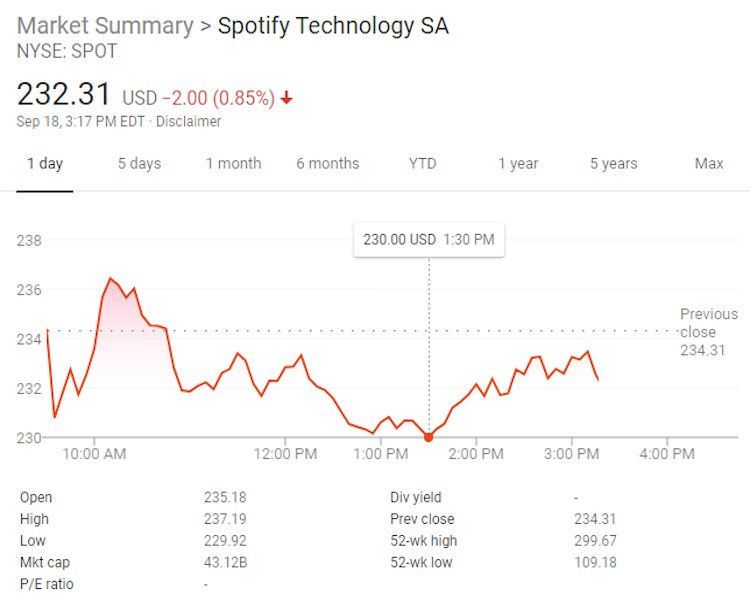 Spotify stock is down more than 20 percent this month, prompting many investors and music industry voices to levy questions about the dip’s underlying causes and SPOT’s path forward.

On September 1st, 2020, when The Joe Rogan Experience made its long-awaited Spotify debut, SPOT shares closed at $291.75 apiece – roughly double their price at the beginning of March. At the time of this writing, however, Spotify stock was trading for $232.31 per share, which represents a nearly one percent dip on the day and an over 20 percent falloff since September’s start.

Given this substantial downturn – as well as the positive outlook and approximately $300 target prices expressed by a multitude of prominent investors – members of the music community and the financial sector are speculating as to what brought about the lessened worth. And as is often the case in stock-valuation decreases, the 20 percent dive appears to have resulted from a variety of factors – including the widespread economic uncertainty that the COVID-19 pandemic has ushered in.

Behind-the-scenes disagreements centering on The Joe Rogan Experience may also be contributing to SPOT’s troubles. Spotify’s stock-market ascent began in earnest four months back, immediately after announcing a (reportedly $100 million) deal to become the exclusive home of Rogan’s ultra-popular podcast. The partnership got off to a decidedly rocky start, though, as a number of JRE episodes didn’t make the transition – and hadn’t made the transition, at the time of this writing – to Spotify.

Though the missing installments – most of which involved controversial guests – were initially attributed to technical difficulties, it now appears that the absence could be a byproduct of internal opposition to some of Rogan’s conversations. Yesterday, we reported that Spotify staff had called on higher-ups (CEO Daniel Ek among them) to remove additional JRE episodes yet.

As details pertaining to employee-exec conversations leaked despite management’s requesting that they be kept under wraps, it seems that the matter is far from settled. And because the uncensored, unfiltered nature of the JRE is a key component of its appeal (the comedian said at the outset that Spotify would be uninvolved in his show’s creative process), the issue might threaten the professional relationship’s future.

Next, we reported earlier this week that Amazon Music had entered the podcasting space in a big way, offering an array of programs to both ad-supported users and paid subscribers. That the competing music streaming service is officially investing in podcasts – including already-closed exclusive deals with DJ Khaled, Becky G, and others – may have contributed to the Spotify stock woes.

Lastly, Spotify lashed out at Apple One subscriptions shortly after they were unveiled earlier this week, condemning Apple’s “anti-competitive behavior” in a statement. These public concerns – and, more broadly, the unique ability of Amazon and Apple to provide bundled-service options – should also be considered.

Spotify stock is still up about $80 on the year – meaning that September’s 20 percent falloff isn’t necessarily indicative of a SPOTpocalypse. Nevertheless, the decrease is hardly encouraging, and it’ll be worth monitoring shares’ fluctuations moving forward.