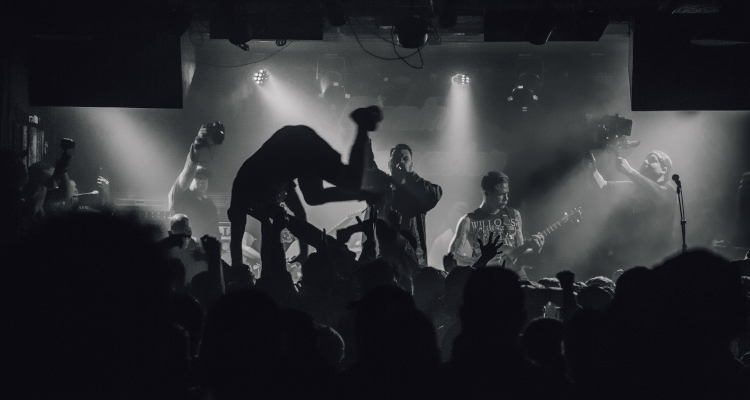 Video shows that towards the end of the New York City-based hardcore-punk group’s set, multiple fans took the stage, sang with front man Roger Miret, and dived back into the audience, evidently unimpeded by security.

While these jumps took place without incident or injury, another attendee stepped onto the four-foot-high stage as Miret was crouched down, interacting with those in the tightly packed crowd’s first row. This individual appears to have then placed his hand on Miret’s shoulder, leapt clean over his person, and spun several times before landing in the audience and harming Kooken, who “lost feeling in his extremities” and subsequently underwent an operation at a New Jersey hospital.

Surgeons removed portions of the victim’s vertebrae to relieve the pressure on his spinal cord, and following the procedure and physical therapy, Kooken was eventually able to resume surfing, cycling, and skiing, per the release announcing the settlement. His $2 million payment – which represents “the maximum amount of available insurance coverage,” according to attorney Mark W. Morris – derived solely from this coverage. Filings indicate that Kooken voluntarily dismissed the suit against the individual defendants.

The unfortunate stage diving accident – and substantial settlement – may well reignite discussion pertaining to the controversial practice, which some believe music venues should promptly ban.

One Tonya Ross claimed to have suffered “catastrophic injuries” – including a concussion and a neck fracture – from a stage dive at a 2017 Every Time I Die show. And longtime stage diver Steve Aoki faced a $10 million lawsuit after inadvertently breaking a fan’s neck in a leap.

Nevertheless, more than a few social media users are expressing their desire to return to traditional concerts – and resume stage diving. On this front, we reported last week that over half of live-music execs believe in-person performances will experience a full-scale resurgence in 2021. Within the encouraging figure, the majority of respondents stated that they’re banking on a third-quarter comeback.

The current 2021 music-festival lineup reflects these stats. Coachella is scheduled for April of 2021, EDC Las Vegas is booked for May, Bonnaroo is slated for June, and Lollapalooza is set to take place between late July and August’s start.