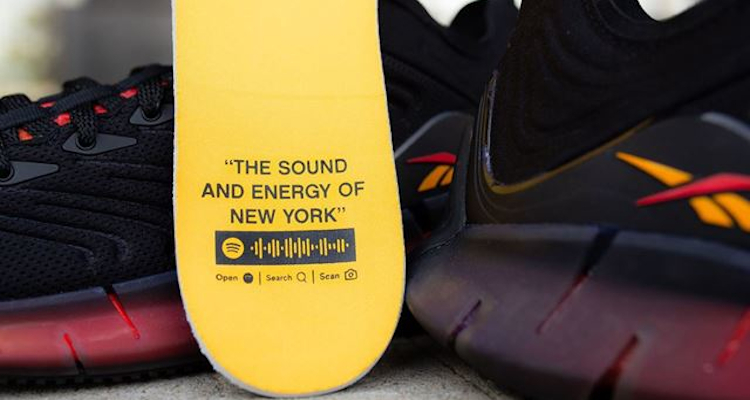 Reebok and Spotify have partnered to release the Zig Kinetica Undersounds collection, a limited-edition line of sneakers that feature custom-printed Spotify playlist codes on their inner soles.

In this vein, Hesterberg and Hagerty chose a “spicy” yellow color scheme for the Atlanta Zig Kinetica Undersound shoes as an homage to the city’s famed lemon pepper wings. The Houston pair features a white exterior with a metallic-pink finish (due to the strong car culture of “Space City”), in addition to a yellow interior inspired by the prominent role that queso plays in local Tex-Mex cuisine. And the New York City variation, for its part, consists of a black base (as the Big Apple is the city that never sleeps) and “sunset and neon tones that you would see on the famous theaters and music venues,” according to Hesterberg.

Building on the Spotify partnership, each shoe’s inner sole includes a “Sound and Energy” message, complete with a Spotify logo and a scannable link to a playlist that reflects the city at hand. Consisting of 12 to 16 tracks, these playlists include works from Atlanta native Lil Baby, Texas’s Megan Thee Stallion, and the late Pop Smoke, who was born in Brooklyn.

The Zig Kinetica Undersound shoes are available for purchase (costing $120 per pair) presently. Given the innovative nature of the Reebok-Spotify deal (as well as Reebok’s tapping Cardi B and Khalid to serve as “brand partners”), it’s not a stretch to state that the future could bring further collaborative contracts. The Adidas-owned athletic-wear company announced last month that it had inked a partnership with ASAP Nast, whose full name is Tariq Devega. The Harlem-born artist’s music is featured on the Zig Kinetica Undersounds’ New York playlist.

More broadly, other evidence also suggests that this agreement between Spotify and Reebok may set the stage for a more comprehensive deal in the future. Spotify (and competing streaming services) have long moved to gain a market edge with all things exclusive. Plus, Reebok’s six-year, reportedly $70 million apparel contract with the Endeavor-owned Ultimate Fighting Championship (UFC) is set to expire at this year’s end; the partnership’s conclusion might usher in a broader pivot to the music space.