Who Says Spotify Gets to Have All the Fun? Giddy Proposes a More Collaborative Streaming Music Service 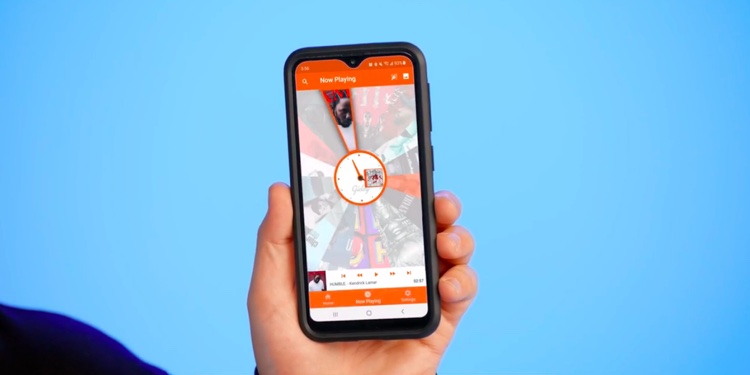 In today’s streaming-dominated music landscape, names like Spotify, Apple Music, and Amazon monopolize the discussion. But that could be opening opportunities: now, upstart platform Giddy is aiming to fill a void in personalization and collaborative listening.

DMN has joined forces with Giddy, an offshoot of Easy Song Licensing, to help them meet their Kickstarter funding goal and officially join the competitive streaming music market. Wish them luck — or better yet, contribute!

As millions have already discovered, leading music streaming services like Spotify, Apple Music, and Amazon Music offer a massive number of tracks. Their sizable catalogs span everything from classic songs to charting new releases, with endless playlists to curate the experience.

But that doesn’t mean smaller platforms aren’t thriving. Twelve years after its founding, Bandcamp has established itself as a viable option for musicians who are looking for a more direct means of selling music and products to fans.  While Spotify generally puts a distance between fans and artists, Bandcamp has doubled down on direct customer-to-artist interaction.

Specialty music apps like those of Peloton and the Ultimate Fighting Championship (UFC), which seek to connect users and professionals in music-driven digital communities, are also becoming increasingly prominent. And on the video-sharing front, the immensely popular Triller and TikTok allow millions of individuals, from all corners of the globe, to complement their unique expressions with music.

All of those non-traditional platforms have succeeded by filling voids left by the mega-streaming giants.

Now, Giddy says something else is missing: the content-sharing and socializing over music that got wiped away with digital (think of playing records with friends, for instance). Giddy also says that the mega-platforms don’t allow listeners to tailor playlists for their quick-moving schedules and daily lives.

Giddy seeks to bridge the gap, thereby bringing listeners closer to one another and to the artists themselves.  The company, created by Easy Song Licensing, aims to achieve a high degree of interactivity while keeping users engaged with both the music and one another.

In a bid to make playlists more interactive, for example, Giddy is offering a drag-and-drop feature that allows users to position songs into the app’s signature clock-face playlist.  The clock then plays the tunes throughout the day (or the night) based upon your choices. Giddy thinks that the traditional playlist exists in a time vacuum, and there’s no reason that music can’t fit each component of your schedule.

Collaboratively, friends, coworkers, relatives, and those connected solely by their love for music can connect via Giddy’s Party Mode. In an era when many are forward – and often a bit too forward – about the songs they’d like to hear on playlists, Party Mode serves as something of a “fair jukebox,” tallying up and ordering listeners’ preferred tracks as impartially as possible (though not randomly).

Accordingly, everyone would have a chance to enjoy and share personally appealing music – from any device. You’d even be able to listen along with family members, celebrities, and others in real time.

And regardless of which genre you like most, you won’t have any trouble finding personally appealing tracks on Giddy, which has lined up partnerships with leading major labels as well as multiple indie groups.

Despite these pre-arranged agreements and Giddy’s innovative features, however, the app is still in the validation phase.

If all goes well, Giddy will debut in July of 2021 only after meeting its Kickstarter funding goal. Higher-ups have acknowledged that the campaign is designed to validate the potentially game-changing underlying concept.

To bolster support and further incentivize personalization-minded music fans, Giddy is offering a number of invaluable rewards across its Kickstarter campaign tiers. From subscriptions priced far below the app’s already-affordable $9.99 monthly cost to limited-edition clock faces, backers can unlock benefits for as little as $10. Also available are multiyear promotional plugs – including featured-playlist placements for indie artists.

Easy Song Licensing president Mark Meikle conceived the idea for Giddy during the early hours of the morning last October, having long been in search of a way to crack the ultra-competitive streaming sphere.

Meikle brings 15-plus years of experience in music licensing to the table, which will undoubtedly assist in the tricky licensing terrain that streaming platforms face. But far beyond licensing, Giddy is aiming to usher in a new era of personalization and socialization in streaming.