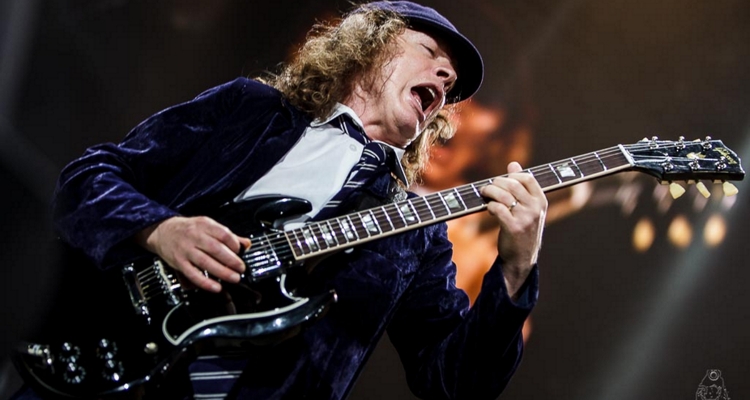 Dodge has licensed the unreleased AC/DC track, “Shot in the Dark,” for its new ad campaign.

The AC/DC classic song “T.N.T.” appeared in the original Talladega Nights movie. So “Shot in the Dark” making its debut in a Dodge commercial isn’t too far off-brand.

AC/DC has also released a behind-the-scenes teaser for its upcoming music video for “Shot in the Dark.” The full song will debut on Wednesday, October 7th. Angus Young, Brian Johnson, Phil Rudd, Cliff Williams, and Stevie Young appear in the clip. The band confirmed frontman Brian Johnson would be returning just days ago. Stevie Young took over on guitar for the late Malcolm Young.

The official album name hasn’t been released but is suspected to be PWR/UP. There’s still no official release date for the album, though the band’s website suggests December 7th. AC/DC has been teasing new information about their upcoming album all week on Twitter. They’ve also been using the hashtag, #PWRUP which is speculated to be the album name.

Brian Johnson left AC/DC in 2016 in the final leg of the Rock or Bust Tour due to hearing issues. Axl Rose replaced him for the remaining shows. Phil Rudd left the band before that tour began due to legal problems in New Zealand. Williams said he felt leaving the band was right after the passing of Malcolm.

“Losing Malcolm, the thing with Phil and now with Brian, it’s a changed animal,” he told Rolling Stone in 2016. “I feel in my gut it’s the right thing.” AC/DC has kept a low profile since their 2016 dissolution. Now it appears more than just one unreleased track is on the way. The group was also photographed outside a Vancouver recording studio in 2019.

The band managed to keep the project a secret even from their recording engineer. In a recent episode of the AC/DC Fans podcast, Mike Fraser talks about that visit to the Vancouver recording studio.

“As far as I knew, Brian had retired, Cliff had retired, and with Phil and some of his problems he’s had in his home country, who knew if he was even gonna be allowed out of the country,” Fraser says. Fraser says it was a total shock to see all the band members ready to record. “The whole band’s here: Brian, Cliff, Phil, and Stevie – they’re here, and we’re ready to rock another record.”