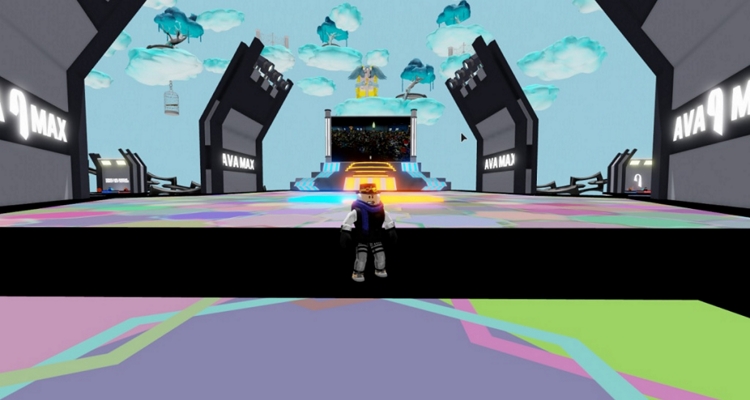 In September, Roblox announced a partnership with Ava Max for a new album launch event. The virtual fan meetup celebrated the launch of her new album, Heaven & Hell. The event itself was pretty simple compared to Fortnite’s whole-island Travis Scott concert, but it highlights how video games are becoming a go-to destination to meet artists.

The Roblox music launch party featured Ava Max on a huge screen in front of a dance floor. Max talked about the inspiration behind the album and then performed a few songs for fans. Flashing lights, fireworks, and a platform that descends into virtual hell were all a part of the show.

Around 1.15 million unique players showed up to experience the Roblox music release party.

“The stretch goal is to go to the non-obvious places, where we can make the virtual experience even better than the real-world experience,” Vlassopulous says.

That has become especially important since the COVID-19 pandemic hit. Most live concerts and events are cancelled throughout the rest of 2020, and many artists are turning to Twitch and Facebook live donations to make a living.

Roblox doesn’t have the same cultural cache that Fortnite has commanded over the last few years. But it’s a platform that caters to young gamers and those who grew up playing Roblox. Roblox has an estimated 150 million players across the globe, making it an attractive audience for musicians.

Roblox was also a broadcast partner for the One World: Together at Home benefit concert. Since then, the platform has been growing its music appeal. Appearing in a Roblox music concert is something that doesn’t take months and months to happen – unlike live concerts. Roblox says the Ava Max music launch party is like a teaser of what’s to come for the platform.

“Concerts, if we do them in the future, would be more high-fidelity,” Vlassopulos confirms. “Our notion of a virtual concert we think has to have a virtual artist, a virtual stage, a virtual audience.”

For now, things are decidedly 1.0. The Roblox music stage where the Ava Max event took place was pretty bare bones. Aside from the big screen, a small merch booth was present for users to buy in-game Ava Max items.