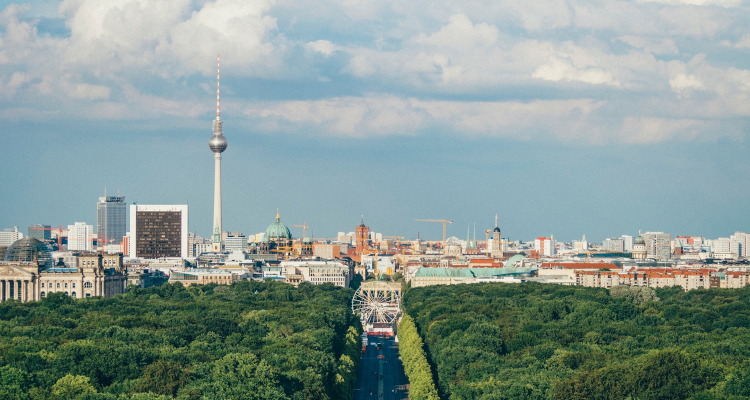 Sony Music higher-ups unveiled their sprawling new worksite this morning, in a general release. The European megaplex will house all of Germany’s Sony Music Group employees, including those who work in Sony Music Germany, Austria, and Switzerland’s classical music department as well as those at today’s largest publisher, Sony/ATV. Plus, team members within the German international division (which oversees operations in continental Europe and Africa) are set to begin reporting to the HQ.

The enormous space, located specifically at Bülowstrasse 80, boasts a full-service recording studio and “state-of-the art music rooms” for crafting and recording new tracks. SME also noted in the release that it will regularly welcome artists and “external partners” to on-site panels and workshops, but the events’ details weren’t provided.

The massive structure is just a nine-minute drive from the Sony Complex and the Sony Germany headquarters – a point that appears to reflect the strong overall impression left on company officials by Germany’s capital and most populous city. To be sure, the release describes Berlin as “the music capital of Europe” and emphasizes that SME is looking to bolster its team with local hires. Sony Music’s main German branch (and center of European operations) was previously located in Munich.

Patrick Mushatsi-Kareba, CEO of Sony Music Germany, Austria, and Switzerland, noted the potential effects that the move could have on artists: “With our new location we also want to give our domestic roster even more international exposure, with the support of the international marketing team of the region, while also enabling young talents and creatives to benefit from our worldclass expertise and infrastructure in this exciting environment.”

In spite of the coronavirus pandemic and its far-reaching economic and logistical impact, 2020 has seen several prominent music industry companies upgrade their offices and establish new divisions.

TikTok began the year by opening a 120,000-square-foot branch in Los Angeles – though the controversial video-sharing app is facing a decidedly uncertain future in the U.S. The ByteDance-owned platform followed this move by leasing a seven-floor office in Times Square, while February saw Spotify secure a 20,000-square-foot office space in Miami’s Wynwood Arts District.

Back on the major-label side, Warner Music has made clear its international-expansion aims by planting flags in Turkey, India, and Vietnam in 2020. Universal Music Group (UMG), for its part, has continued to establish a presence in Africa, which has a quick-growing music scene.