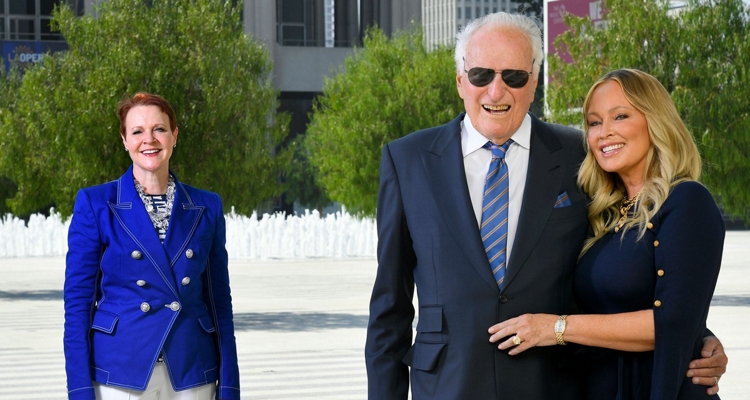 The Music Center has received a $25 million gift from Jerry and Tina Moss to benefit new programming initiatives.

Thanks to the generous donation, the arts organization in Los Angeles will establish a yearly free summer concert, open to all. It will be held outdoors in the newly named Jerry Moss Plaza – located at The Music Center. The organization says this gift will help sustain and enhance its commitment to free and low-cost events.

The donation will also help launch art partnerships with community organizations to help bring attention to artists. The program will emphasize Black, Indigenous, and People of Color (BIPOC) artists.

Jerry Moss is a legendary music executive. Aside from co-founding A&M Records, he’s helped shape the careers of major artists like Janet Jackson, Joe Cocker, Sting, The Carpenters, and many others.

Moss has been a long-time Music Center supporter since 1968. His $25 million donation is the single largest contribution to programming the organization has received.

“The Tina and Jerry Moss gift empowers the arts organization to sustain its current free and low-cost presentations while also creating new arts experiences, supporting TMC’s vision to deepen the cultural lives of all Angelenos by ensuring access to quality, affordable arts programming that is relevant to and reflective of Los Angeles’ diverse communities,” The Music Center said in a statement.

With the grant, TMC will develop and produce an annual celebration of music on the Jerry Moss Plaza each summer. These shows will feature headliners and performers “whose artistry and appeal resonate with Moss’s music legacy.” The new funding will also help The Music Center invest in critical amenities, such as a new sound system for the Jerry Moss Plaza.

The new initiative is co-designed with community partners, including those focused on health and wellness. It will help to ensure that BIPOC artists have more opportunities to present their work at TMC.

“Music and the arts have always been a large part of our lives as well as providing a sense of passion and purpose. We have gone to The Music Center over the years for wonderful, entertaining cultural experiences,” said Tina and Jerry Moss. “Given its focus on reaching even more Angelenos with meaningful, relevant programs, The Music Center is well-positioned to realize our dreams for this gift.”

Jerry Moss says he considers himself “a music man, and I want to celebrate that at this stage of my life.”