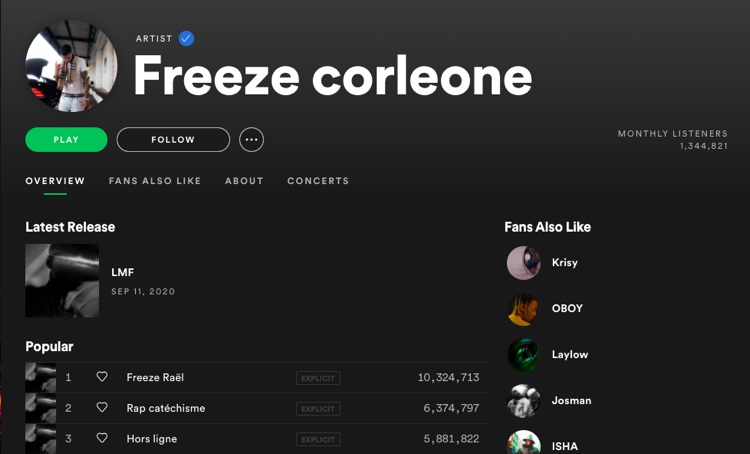 French rapper Freeze Corleone on Spotify. The rapper has been criticized for spreading anti-Semitic hate by Jewish groups and French officials.

Last week, Joe Rogan questioned why activist Spotify employees seemed so intent on editing his podcasts — but unconcerned by highly-explicit and controversial lyrics on the platform. That’s a question also being asked by Jewish groups concerned about anti-Semitic content being actively promoted by Spotify.

For those just tuning into this controversy, a group of Spotify employees has reportedly been demanding direct editorial oversight over Joe Rogan’s podcast content for weeks. Rogan, who was roped into a Spotify exclusive deal for an estimated $100 million, has been subject to constant internal attacks from the activist group, particularly over guests and viewpoints viewed as transphobic.

Already, Spotify omitted certain podcast episodes involving controversial guests during its content migration. Whether that editing goes any further is unclear, though Rogan pushed back on the demands last week. “If you have a problem with people saying terrible s—t and you work for Spotify, maybe you should listen to some of the lyrics,” Rogan stated. “Because some of the lyrics and some of the f—king music that you guys play over and over and over again makes my shit pale in comparison.”

Rogan pointed to some extreme gangsta rap lyrics found on Spotify, including songs like ‘Cop Killer’ by Ice-T’s Body Count and numerous tracks by N.W.A.  But Jewish groups have also been sounding the alarm about hate-filled, anti-Semitic rap lyrics on the Spotify platform — without any response from Spotify.

The letter, authored by the Center’s director for international relations, Dr. Shimon Samuels, pointed to extremely anti-semitic lyrics and social media posts from the rapper.  That includes direct praise of Adolf Hitler and the Third Reich, Holocaust denial, and broad attacks against prominent Jewish last names.

“Mr. Ek, we urge you to remove Freeze Corleone’s raps from Spotify, thus evoking awareness in Sweden and beyond that malicious hatred can kill and is not ‘freedom of expression,'” Samuels wrote to Ek. But the Spotify CEO hasn’t responded to the demand, and neither have any activist Spotify employees. Just last week, Samuels told Digital Music News that he hasn’t received any correspondence back.

But Samuels isn’t the only one raising this issue. Last month, the International League Against Racism and Anti-Semitism sharply criticized the rapper’s repeated racism against Jewish people — and his wide availability on platforms like Spotify, Apple Music, YouTube Music, Deezer, and others. “Pro-Hitler, anti-Semitic and pro-conspiracy theory lyrics are in Freeze Corleone’s songs,” the group noted while highlighting lyrics like:

“I arrive determined like Adolf in the 30s”; and

Addressing platforms like Spotify, Apple Music, Deezer, and TIDAL, the group asked: “what are you waiting for to report it and ban it permanently?”

Freeze Corleone, whose real name is Issa Lorenzo Diakhaté, has racked up millions of streams on Spotify. But Spotify isn’t just ignoring this rapper — they’re actively promoting him.

The rapper is not only available on Spotify, he’s prominently featured on the Spotify-curated Fresh Raps playlist and Spotify’s top chart playlists for both France and Belgium. The last two are chart-based, while the Fresh Raps playlist is actively curated by Spotify employees. Collectively, these playlists draw millions of subscribers and plays.

Separately, the rapper has been dropped by his label, Universal Music Group, over the anti-semitic lyrics. Even the French Ministry of the Interior is actively investigating legal actions against Freeze Corleone, with French Interior Minister Gérald Darmanin publicly urging Facebook and Twitter “not to spread this garbage.”

“These words are unspeakable,” Darmanin stated.  “At my request, the Ministry of the Interior is investigating legal proceedings as quickly as possible to prosecute the perpetrator.”

All of which raises the question of whether Spotify’s activist employees are selecting specific causes to champion, while ignoring most others.  Ironically, while certain employees are demanding the editing and removal of Joe Rogan’s podcasts, the company is actively promoting an artist espousing ethnic hatred.