Billie Eilish Virtual Concert: Is This the New Blueprint for Live Streams? 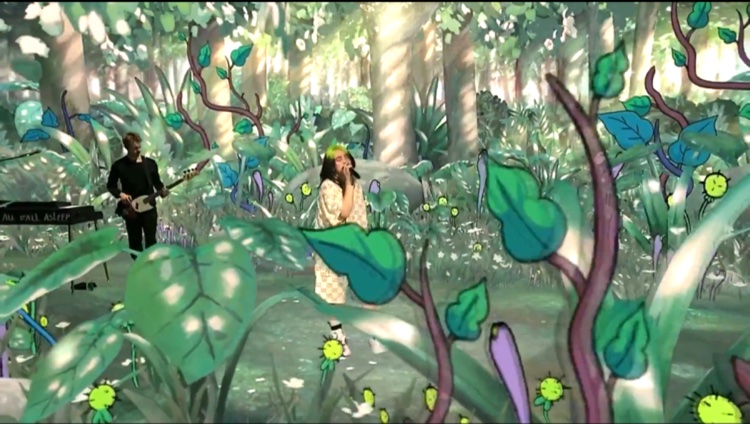 On Saturday night (October 24th), Billie Eilish performed a global virtual concert, Where Do We Go? The Livestream. Performing with Eilish was her singer-songwriter brother, FINNEAS, and touring drummer, Andrew Marshall. It was held at a studio in Los Angeles, using XR technologies to power the immersive interactive set.

Tickets to attend this pay-per-view livestream were priced at $30, providing full access to all interactive experiences. See the full set list below.

Entering the site prior to the show, one of the interactive rooms was a merch shop. It was set up as a 360-degree room with apparel and Eilish’s albums individually on display. This gave fans an opportunity to purchase exclusive merch and the Billie Eilish signature edition Fender ukulele. Part of the proceeds went to Crew Nation, a charity powered by the Music Forward Foundation supporting live concert crew members affected by event cancellations throughout the year.

The pre-show kicked off with special guests Lizzo, Alicia Keys, Jameela Jamil, and Steve Carrell, all of whom encouraged viewers to vote. Fans were provided with informative resources for voting in this year’s election, and the event was supported by various organizations such as Rock The Vote, Headcount, and Vote Save America.

Viewers were given a preview of Billie Eilish: The World’s A Little Blurry, an Apple Original documentary out February 2021. From there, Eilish lets her fans know it was time to start the show!

Eilish opened the set with “bury a friend,” showcasing exactly how large the stage was and where all the visual effects would be going down. With the stage powered by XR technology, connecting real and virtual environments, Eilish was able to transport viewers into different worlds for each song.

This wasn’t just a performance with a screen behind the artist. The digital effects were truly interactive with Eilish as she moved around the stage from any direction. The visual effects for some tracks placed her in settings parallel to the song’s music videos.

Fans were able to transport into another reality with “ilomilo” as the stage submerged the performers underwater as if they were standing atop bedrocks deep in the ocean. Surrounding them were various underwater specimens and cartoon creatures, ending the performance like the music video with a 3D shark approaching the screen.

In the “my future” music video, an animated version of Eilish is placed in an enchanted forest full of cartoon creatures in nature. The digital effects created an enchanting environment, with the animated creatures and trees interacting with Eilish, FINNEAS, and Andrew Marshall while performing.

Along with parallels to her music videos, there was also a parallel to Elish’s live tour performance.

Before Billie and FINNEAS performed “i love you,” she announced that the two had been working on a new album. As they began this track, the digital effects made it seem as if they were being lifted by a growing monolith in a starry-night sky. Fans were brought back to her performances in which the two were lifted on a floating bed, as fans would hold a light to act as stars in the sky.

Throughout the show, she continued to encourage her fans to vote and emphasized the importance for young people to engage in making a change.

you should see me in a crown

No Time To Die

when the party’s over

all the good girls go to hell