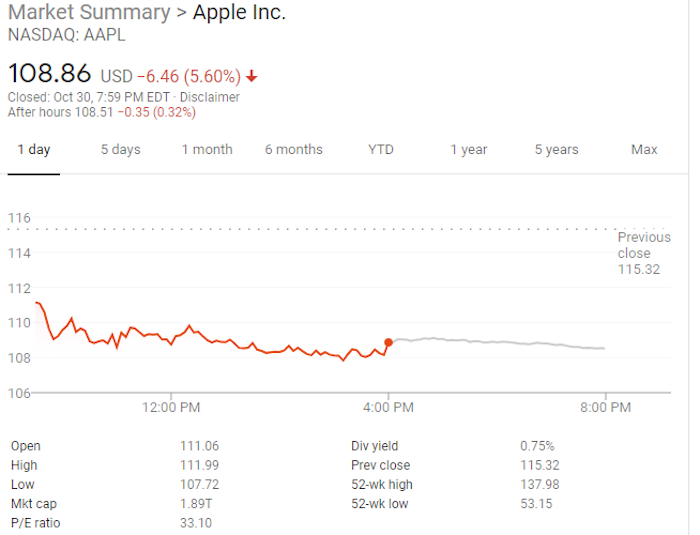 Apple stock (AAPL) dropped nearly 13 percent in October, including a more than $15 falloff between its month-high closing price ($124.40, on the 12th) and its closing price on Friday ($108.86). Now, many investors and fans are asking what brought about the decline.

Apple stock kicked off October in a big way, closing at $116.79 per share on the first day of the month and embarking on a (mostly) upward ascent before touching the aforementioned $124.40 per-share worth on the 12th. This decidedly significant price point marked the first time since early September that AAPL had cracked $124, shortly after its four-to-one stock split rolled out.

For reference, Apple stock was hovering around $50 to $55 per share during August and September of 2019 and approximately $59 to $65 per share between the end of September and the beginning of October (figuring retroactively for the four-to-one split). The points bear reiterating because they provide additional context to AAPL’s October 2020 decrease, which encompassed a 5.6 percent dip on the 30th alone. Shareholders who’ve nearly doubled their investment in a year’s time may be relatively quick to sell in today’s uncertain financial climate.

Sales deriving from wearables, home, and accessories also heightened despite the COVID-19 pandemic, from $6.52 billion in Q4 of the last fiscal year to $7.88 billion during the same period in 2020. And importantly, performances improved year over year in the Americas ($1.38 billion more revenue), Europe (a $1.95 billion uptick), Japan (a $41 million gain), and the rest of the Asia-Pacific market ($475 million growth) and were enough to offset a $3.19 billion decline in earnings attributable to consumers in Greater China.

Nevertheless, a lack of guidance for the initial quarter of the 2021 fiscal year – including projected sales for the iPhone 12, which launched last month – appears to have rattled some investors. (Worth noting is that due to the pandemic, Apple opted not to offer guidance in its Q2 and Q3 FY 2020 reports.) Moreover, Apple CEO Tim Cook said during a conference call delivered following the financial report’s release that he’s “confident that we will grow this quarter in China” – a sentiment that some financial professionals may not share.

Lastly, the nine-year Apple head didn’t mince words when discussing his company’s supply constrained status amid the coronavirus crisis, stating: “But if you look at iPhone, we are constrained today, and that’s not a surprise, we are at the front end of the ramp, if you will. And how long we will be supply constrained, it’s hard to predict.”