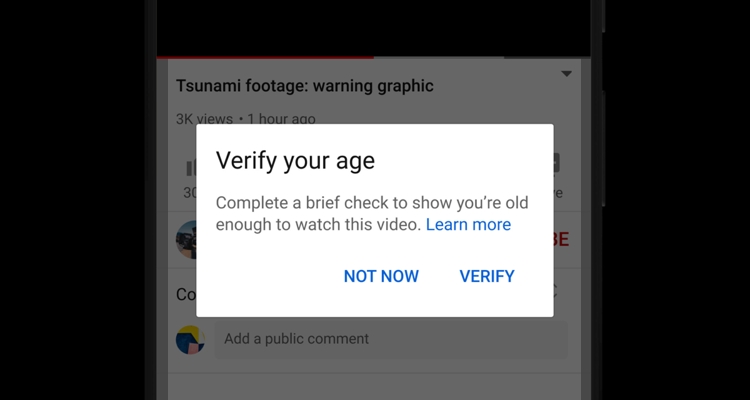 YouTube is expanding its age gate verification requirements in Europe.

In the official blog post announcing the upcoming change, YouTube says it is to comply with EU laws. The European Union’s Audiovisual Media Services Directive requires age gating restricted content. That means users in protected regions must submit their proof of age. Documents include a valid ID or a credit card indicating the user is over the age of 18.

Today’s move is part of a broader initiative YouTube is taking to limit young users’ exposure to explicit content.

This comes just two years after a huge online backlash called Elsagate swept the platform into the national spotlight. Children were being served, seemingly innocent cartoon messages loaded with explicit references and audio.

YouTube has since worked to clean up the platform and limit these types of videos from gaining traction in its algorithm. It also launched an exclusive YouTube Kids app for a more curated approach to kid-approved content. What’s worrying is that YouTube’s algorithms will also be responsible for the age gate restriction.

YouTube says over the coming months, changes will come resulting in “more videos being age-restricted.” Any content owners who feel the age-restriction algorithm erroneously flags their content can appeal the decision. That hasn’t exactly gone over swimmingly with content creators during the YouTube Adpocalypse, however.

“To ensure content is available only to its appropriate audience, YouTube will redirect users who attempt to watch age-restricted videos on most third-party websites to its own site where they will be asked to sign in and prove they are over the age of 18,” according to the official blog post.

That means no more watching YouTube music video collections without an age gate verifying them in Europe.

It will be interesting to see how this will impact music video viewer growth as more age-restricted content comes online. This isn’t like the current YouTube age-gate where you click 18 even if you’re not and watch the video.