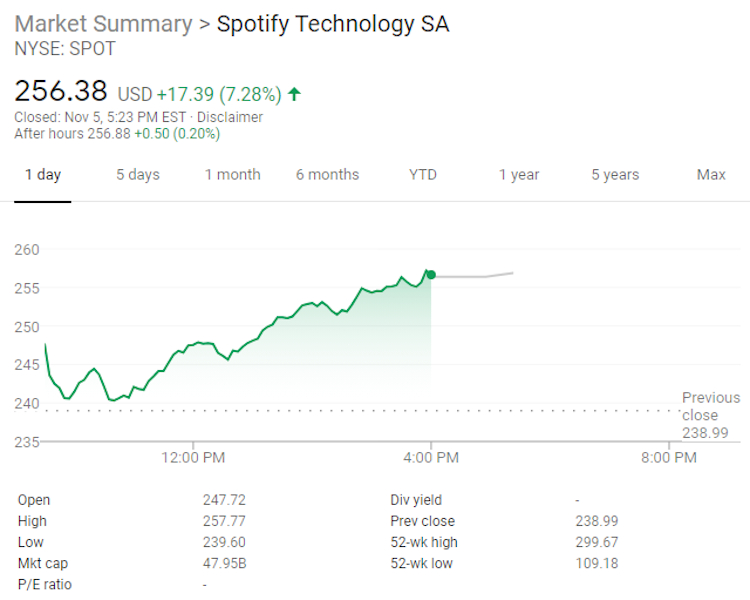 Last week, Spotify missed earnings estimates but added 21 million subscribers during 2020’s third quarter. Spotify stock has struggled in the interim, though some financial analysts are encouraging buyers to acquire shares ahead of an anticipated uptick.

While quick-moving investors could have scored a nearly $25 per-share profit if they’d nabbed shares on Monday and cashed out today, multiple experts are maintaining that SPOT’s long-term potential is enough to warrant a purchase even at the present price. Shortly before the Stockholm-based platform detailed its Q3 performance, Morgan Stanley rolled out a $300 target price, up from $275, due in part to an expected hike in MAUs and ambitious global expansion plans.

Post-earnings report, however, CFRA Research analyst John Freeman switched his SPOT position from “hold” to “buy” and increased his target price from $249 to $282 – or another $25 higher than SPOT’s closing price today. In explaining his decision, Freeman cited Spotify’s growing role in the podcast space (its program library jumped by 400,000 throughout Q3, to a total of 1.9 million), as well as a 27 percent year-over-year gain in paid subscribers. As Morgan Stanley also mentioned, this uptick is the result of international-expansion plans.

Separately, analyst and Seeking Alpha contributor Gary Alexander indicated that he doesn’t “see any fundamentals at risk.” Alexander supported his position by noting Spotify’s expansion into new territories and into podcasting, before emphasizing the MAU gains and ad-earnings rebound (a gain of 41 percent from Q2 2020), among other points. “Take advantage of the post-earnings slide to initiate or build up a long position in this fantastic name,” Alexander wrote.

Lastly, more than a few investment powerhouses struck a bullish Spotify stock outlook prior to the Q3 earnings report’s release, with some target prices above $300. It bears mentioning, though, that different professionals have adopted decidedly skeptical stances, including a $204 target price from UBS and a $172 target price from Bernstein. Among the concerns: the number of Spotify users who have “interacted with” podcasts grew just one percent between Q2 and Q3, to 22 percent.

With Spotify’s global expansion playing a central role in most investors’ forecasts, we recently summarized the streaming service’s monthly cost in nations around the world.