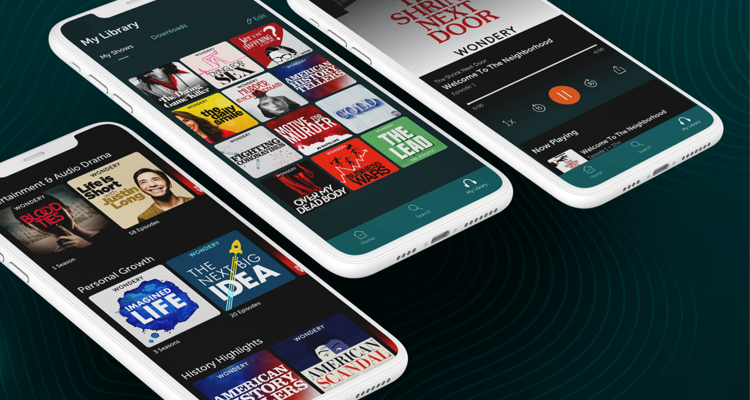 A new report suggests Wondery is shopping itself around to several buyers, including Apple, Sony, and other unnamed companies. Talks are ongoing, and Wondery is seeking between $300-$400 million for its network of shows.

Wondery’s network of shows is estimated to draw in around eight million listeners a month. It holds the rights to a wide variety of podcast content, with a dozen TV shows based on those podcasts in development. One of those podcasts, WeCrashed: The Rise and Fall of WeWork is being adapted into an Apple TV+ exclusive documentary.

Sources familiar with the matter say Spotify has not placed a bid for Wondery, leaving Apple at the table.

Spotify may have had its fill of expensive podcast acquisitions for now. There’s no guarantee they pay off and Spotify is facing its own headache with Joe Rogan. That $100 million acquisition has ruffled more feathers than any other. Spotify employees are unhappy with the Joe Rogan Experience’s new home.

“Many LGBTQAI+/ally Spotifiers feel unwelcome and alienated because of leadership’s response in JRE conversations. What is your message to those employees?” one question asked during Spotify’s recent town hall meeting.

Spotify CEO Daniel Ek acknowledged that around ten meetings have been held with groups and individuals about their concerns. Ek says in response to that, “Joe Rogan and the episode in question have been reviewed extensively. The fact that we aren’t changing our position doesn’t mean we aren’t listening. It just means we made a different judgement call.” Ek also asked that the conversation not be leaked to the press.

JRE episodes with some more controversial figures remain on the Spotify platform. So Spotify obviously has no problem deciding when some things are more offensive than others. The whole kerfluffle proves that giant acquisitions with built-in audiences bring new headaches.

Looking back through Spotify’s spate of podcast acquisitions, most of them were around $50-$250MM at a time. Spotify nabbed the Parcast network for around $56 million and The Ringer for around $250 million. Spotify is working on perfecting streaming ad-insertion for its podcast offering.