The Killers Publishing Catalog Sold to Eldridge Holdings — Including “Mr. Brightside,” “Somebody Told Me,” “When You Were Young” 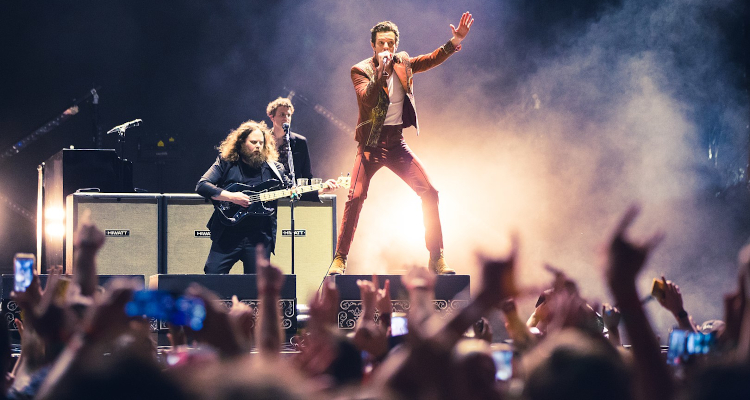 MRC owner Eldridge Industries has purchased the entirety of The Killers’ publishing catalog, excepting 2020’s Imploding the Mirage. The buyout includes hits like “Mr. Brightside,” “Somebody Told Me,” and “When You Were Young.”

The Killers, who’ve sold over 28 million records to date, joined Eldridge in announcing the high-profile transaction this morning. The hit-heavy publishing catalog at the center of the deal encompasses all five of the Las Vegas-based rock band’s pre-2020 albums – Hot Fuss, Sam’s Town, Day and Age, Battle Born, and Wonderful Wonderful. However, the 19-year-old band’s members will retain income on the master side, including from sync deals.

Addressing the sale in a statement, The Killers frontman Brandon Flowers said: “We have the greatest fans in the world. Eldridge’s broad network across music, television, and film will provide new opportunities for our music to be enjoyed by millions across the globe.”

By selling the majority of their publishing catalog, The Killers have joined the likes of Barry Manilow, The Pretenders’ Chrissie Hynde, Motley Crüe’s Nikki Sixx, and a number of other prominent artists and songwriters, all of whom have cashed in on their publishing shares this year. And while UK-based song-investment fund Hipgnosis fronted the cash for each of the latter three catalogs (as well as many others yet), a growing collection of companies and professionals are betting on the long-term earning potential of music IP.

To be sure, this marks the first publishing-catalog deal for the Greenwich, Connecticut-headquartered Eldridge, whose cofounder and CEO, Todd Boehly, holds a 20 percent stake in the Los Angeles Dodgers. Moving forward, the five-year-old holding company and Dick Clark Productions owner intends to leverage “its media expertise, industry relationships, and distinct insights into emerging trends to serve The Killers’ existing fanbase and reach new audiences.”

Round Hill Music, for its part, debuted on the London Stock Exchange (LSE) last week, having raised $282 million (of a $375 million initial goal) to acquire a massive 120,000-track catalog.

Evidently, more than a few big-name players believe that publishing catalogs have a path to profitability in the coming years – even considering their undoubtedly substantial upfront price tags. That Round Hill is making moves and Hipgnosis reportedly pays well above market value for its catalogs are also significant points with regard to the Eldridge-Killers deal, the financial terms of which weren’t outlined in the release.

Earlier this year, DMN was first to report that a comprehensive internal investigation had found “no corroboration” of sexual-assault allegations made by a former Killers touring employee.