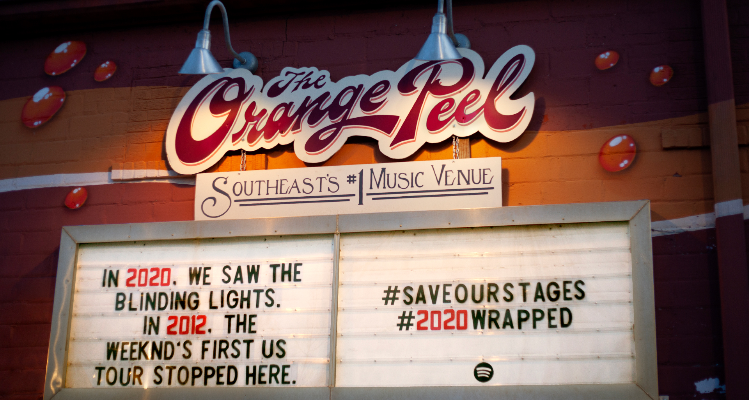 Asheville, North Carolina’s The Orange Peel, where The Weeknd will play as part of Spotify and NIVA’s 2020 Wrapped initiative. Photo Credit: Spotify/NIVA

Spotify has partnered with the National Independent Venue Association (NIVA) to sponsor performances at indie venues across the U.S., donating a total of $500,000 to the NIVA Emergency Relief Fund – which is administered by The Giving Back Fund – in the process.

NIVA and Spotify unveiled their partnership and the half-million-dollar Emergency Relief Fund donation today. The high-profile artists who will play the indie venues – five sets have been announced thus far, and the remaining gigs will be detailed in the coming weeks – were selected based upon the newly released results of Spotify’s annual Wrapped campaign.

To kick off the NIVA- and Spotify-spearheaded initiative, Alicia Keys will perform at Milwaukee’s Riverside Theater. Lady Gaga has committed to playing The Ritz Ybor in Tampa, with Childish Gambino set to headline a show at Portland’s The Aladdin.

The Weeknd, who failed to receive a single Grammy nomination despite the fact that his “Blinding Lights” enjoyed the most streams of any track on Spotify in 2020, is booked for Asheville, North Carolina’s The Orange Peel. And London native Jessie Ware, for her part, is preparing to entertain fans and support the cause with a performance at Atlanta’s Center Stage.

Separately, Spotify’s Wrapped findings presented a few other noteworthy listenership stats. Bad Bunny, who made headlines for scoring the biggest Spotify debut of 2020 after participating in a paid promotional campaign, led the pack in total global streams. Drake finished second, to J Balvin in third, Juice WRLD in fourth, and The Weeknd in the fifth-place slot.

Through her last studio album, When We All Fall Asleep, Where Do We Go?, released in March of 2019, Billie Eilish garnered the most Spotify streams of any female artist in 2020. The “Bad Guy” singer topped the likes of Taylor Swift (whose surprise Folklore release has achieved massive commercial success), Ariana Grande, Dua Lipa, and the fifth-ranked Halsey, who was also snubbed ahead of 2021’s Grammy Awards.

Lastly, The Weeknd’s After Hours was the second most-streamed album on Spotify in 2020 (behind Bad Bunny’s promoted YHLQMDLG). Tones and I’s “Dance Monkey” received the second-largest number of global plays, ranking just beneath the aforementioned “Blinding Lights.” (As an interesting aside, Billie Eilish, Taylor Swift, The Weeknd, Bad Bunny, Drake, Ariana Grande, Halsey, and J Balvin alike are signed to Universal Music subsidiaries.)

Spotify and NIVA’s fundraising effort arrives as lockdown restrictions continue to intensify, both domestically and abroad. Live Nation revealed last month that it suffered a 95 percent year-over-year falloff in third-quarter earnings. And in late October, NIVA teamed up with YouTube for a “Save Our Stages” virtual festival, which raised $1.8 million for struggling venues.