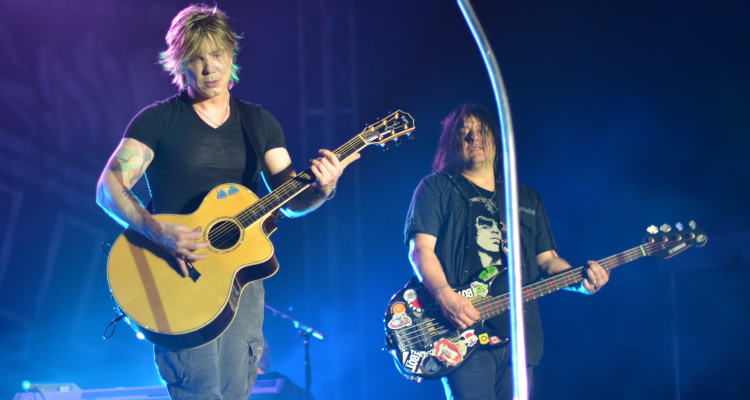 Goo Goo Dolls fans are voicing their qualms with the band being described as a “classic rock group” during the 88th Rockefeller Center Christmas tree lighting special.

The Buffalo-based band joined high-profile acts including Meghan Trainor (with Earth, Wind & Fire), Gwen Stefani, Kelly Clarkson, and Dolly Parton (who covered “All I Want for Christmas Is You” with Tonight Show host Jimmy Fallon) in recording sets for the televised event, which aired on NBC yesterday evening. Moreover, the Goo Goo Dolls released their first holiday album, It’s Christmas All Over, on Friday, October 30th.

The Today anchors hosting the tree-lighting special referred to the Goo Goo Dolls – who formed back in 1986 and initially rose to prominence after releasing A Boy Named Goo in the mid-1990s – as a “classic rock” band on multiple occasions. Predictably, fans were quick to weigh in on the matter via response videos and tweets, with their follow-ups encompassing self-deprecating reflections of age as well as clear-cut expressions of annoyance.

“Wtf? The Goo Goo Dolls are a great band. Don’t get me wrong, I love them, but Classic Rock, they are not. Mainstream Alternative. Maybe ‘Soft Rock.’ The Classic Rock genre is defined as being in between the decades of the 60s and the 80s,” opined another observer.

“No effing way. Goo Goo Dolls is not classic rock. Not for another 15 years… maybe 20. They became mainstream in the 90s for f—k’s sake,” echoed a different Twitter user.

“Goo Goo Dolls is a terrible name for a band. Classic rock folks,” said a person of the opposite opinion. (The “Iris” act’s founder and frontman John Rzeznik once relayed, “If I had five more minutes, I definitely would have picked a better name.”)

At the time of publishing, the group – whose current two members, Rzeznik and Robby Takac, are aged 54 and 56, respectively – hadn’t yet addressed the social-media stir with a public statement. Worth noting, however, is that the “classic rock group” label attached to the band appears to be at least a few years old.

During the Macy’s Thanksgiving Day Parade (which also airs on NBC) in 2017, one viewer noticed and captured video of the Goo Goo Dolls’ “classic rock band” introduction. It’s unclear exactly when the 34-year-old act began using the descriptor, though it evidently outdates this year’s lighting of the Rockefeller Center Christmas tree.

Being widely accepted as a “classic rock group” doesn’t mean that it’s impossible to reach new listeners, as 53-year-old rock band Fleetwood Mac made clear when they wholeheartedly embraced a viral TikTok trend featuring their “Dreams” hit, gaining a number of young fans in the process.