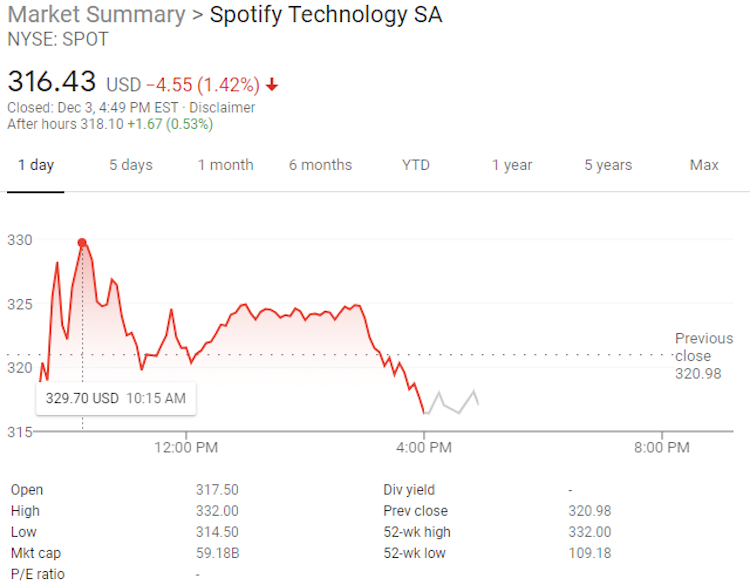 On Thursday, January 2nd, 2020, Spotify stock (SPOT) finished the day at $151.62 per share – a price point that, while seemingly small given SPOT’s current value, represented a significant hike compared to September of 2019’s approximate low of $112 per share.

Though these gains disappeared amid the domestic onset of the COVID-19 pandemic, when SPOT touched $109.18, Spotify stock nevertheless managed to climb over 118 percent from the aforementioned per-share worth in early January.

By April’s end, SPOT had regained the value it parted with during the coronavirus-prompted market shakeup. And a small dip at May’s start ultimately made way for a massive uptick, to above the $192 mark, and set the stage for the ascent to today’s record high of $332. Importantly, the May boost arrived soon after the Stockholm-based platform announced that it would become the exclusive home of The Joe Rogan Experience (JRE).

Even before the ultra-popular program arrived on Spotify in September, investors began to speculate about the earning potential of podcasts, with many financial professionals voicing the opinion that non-music entertainment could enable the platform to obtain long-sought profitability. Music’s margins are decidedly low, for Spotify and competing streaming services, which have featured nearly identical song libraries since the Big Three labels (led by UMG) put the kibosh on exclusive releases years back.

Podcasts offer a means of differentiating music platforms (and enabling them to expand their earning opportunities), and more than a few investors remain optimistic that Spotify will achieve largescale success with the programs moving forward. (Looking to capitalize upon the sentiment and the perceived potential, Amazon Music in September announced that it would begin hosting podcasts, including several exclusive shows.)

Aside from JRE, Spotify closed deals to host shows from Kim Kardashian West, WarnerMedia (and specifically DC Comics), TikTok mainstay Addison Rae, and others. The Joe Rogan Experience was Spotify’s most popular podcast of 2020, despite encountering behind-the-scenes opposition from activist employees and debuting exclusively on the platform just this month.

Bearing these points in mind, as well as the fact that Spotify added 21 million subscribers and some 400,000 podcasts in 2020’s third quarter, it should prove interesting to follow the listener stats associated with the shows in the coming months (and, more broadly, years). While investors are evidently rallying behind SPOT and its 1.9-million-show podcast lineup, however, two final points are worth reiterating.

First, different financial experts yet have taken a bearish stance on Spotify, and particularly the possible profitability (or lack thereof) of podcasts. Bernstein bluntly relayed: “We continue to believe it’s unlikely Spotify will generate much earnings from podcasts.” Additionally, as of last quarter just 22 percent of Spotify’s 320 million or so monthly active users had “interacted with” podcasts.

After rallying to $332, Spotify stock (SPOT) experienced a seemingly sizable selloff, finishing the day at $316.43 per share – well below Wednesday’s closing value of $320.98.