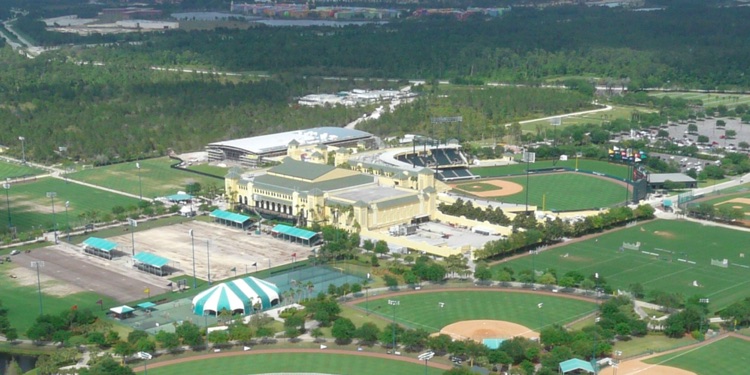 The ‘Disney Bubble,’ which hosted the recent NBA Finals. The NFL may be scouting a similar location for its Super Bowl 2021 Halftime Show (photo: Greg Goebel CC by SA 2.0)

Thanks to continued COVID-19 concerns, the Super Bowl 2021 Halftime Show may take place in a ‘bubble’ environment separate from Raymond James Stadium in Tampa, Florida.

Perhaps The Weeknd should have picked the Grammy Awards, after all. Earlier this week, Digital Music News learned that the NFL is now considering a separate Super Bowl 2021 Halftime Show ‘bubble’ to minimize the spread of COVID-19 during the big game. The concept remains early-stage, according to sources on the musical production side, though details on possible bubble venues and pre-event quarantining logistics are currently under consideration.

The bubble would allow the NFL to isolate players, coaches, and attending fans from the considerable staff required to stage the Halftime Show.  Typically, the Super Bowl Halftime Show features dozens of musicians, dancers, and other performers on stage, with a massive support crew managing lighting, filming, broadcasting, and other logistics.

Beyond that, the performance also requires a large staff of choreographers, coordinators, and assistants, though the NFL believes that everyone involved in the show could be safely contained within a bubble environment.  In terms of the televised event, the transition would be pretty simple, with the game panning to the off-site Halftime Show environment.

But where will this Halftime Show ‘bubble’ exist?

That remains an open question, though ideally, the facility would be near Raymond James Stadium, which is slated to host Super Bowl LV on February 7th, 2021. Sources reiterated that nothing was settled on this front, though an indoor practice facility coupled with an outdoor performance area is also under consideration.

The outdoor performance venue would dramatically reduce the chances of COVID spreading between Halftime Show staff and performers. But it also introduces tricky logistical issues related to weather. That could motivate a move to a ‘rain-free’ location like Arizona or Southern California, while the game itself remained in Tampa.

Another solution would be a scaled-down show, with fewer performers, backup singers, and fireworks. That seems possible, especially with a more ‘intimate’ performer like The Weeknd heading the bill.

Meanwhile, the NFL is taking some cues from the recent ‘NBA Bubble,’ which took place at ESPN’s Wide World of Sports complex at Disney World in Florida. NBA players were almost entirely COVID-free during the season and finals, though logistically, there were far fewer teams and associated players and coaching personnel.  The NBA suffered a massive ratings crash for this season’s Finals, though it’s unclear if the bubble was to blame.

News of the ‘Halftime Bubble’ comes alongside a messy 2020-21 NFL season, one riddled with benched players and postponed games.

Already, the virus is creating some absurd outcomes, while seriously impacting the legitimacy of the season. Just recently, for example, the Denver Broncos lost all three of their quarterbacks because of positive COVID-19 tests. The team was forced to activate undrafted wide receiver Kendall Hinton, who played a bit of QB back in college. Hinton played admirably, though the results were predictably bad — and the Broncos lost the game 31-3.

Elsewhere, the San Francisco 49ers have been forced to relocate to Arizona because of stringent COVID-19 lockdowns in California.  And a Ravens-Steelers game slated for Thanksgiving Day was postponed three times, with the Ravens forced to place 17 starters on its ‘Reserve/COVID-19’ list while activating 10 practice squad players.  The Ravens unsurprisingly lost the game, though only by 4 points to a compromised Steelers squad.