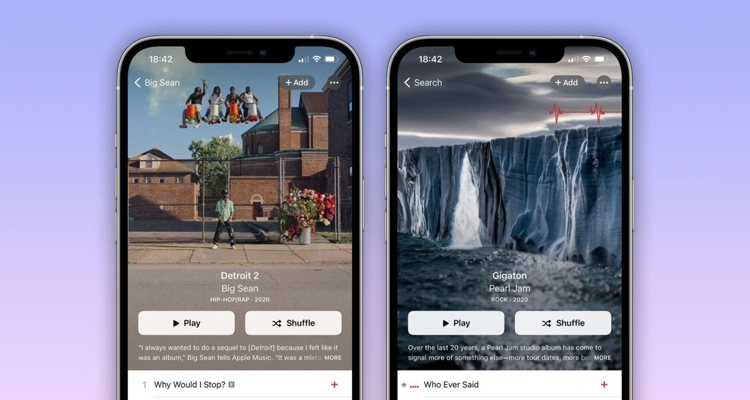 Apple is taking a page out of Spotify’s book with animated album art coming to Apple Music.

The feature debuted in the latest iOS beta, as discovered by 9to5Mac. The feature appears to be available on select albums and playlists. Those with the latest beta can see the animations on Pearl Jam’s Gigaton and Big Sean’s Detroit 2. The animated album artwork does take up more space on the iPhone.

Right now, it’s unclear if this feature will be something users can control, like Spotify Canvas. Spotify Canvas allows artists to create short, looping videos to promote their music. It’s a feature that has been controversial for some, but it seems to increase engagement. iOS 14.3 is expected to be released sometime next week. That means the general public will have access to Apple Music animated album artwork then.

Apple may be pivoting itself to focus more on video content, much like Spotify. Amazon Music Unlimited recently announced users could watch music videos on its platform. YouTube Music offers music videos right alongside lyrics.

Apple Music and Spotify have been slow to embrace video as part of their platform. Spotify added video podcasts in July with the addition of The Joe Rogan Experience. A now-deleted comment from a Spotify Community moderator also suggests music videos are coming soon. But Spotify’s expansion into video may not be limited to just music videos. That comment also mentions documentaries and ‘exclusive video series.’

Both Apple and Spotify are facing stiff competition from YouTube Music. It wants to put the entire music business on one platform, from streaming, music videos, to live ticket sales, and merchandising.

YouTube Music only has around 30 million paid subscribers, but that’s up 60% from last year. Younger artists are getting their starts on YouTube, SoundCloud, and now TikTok – long before they ever enter the music industry.

YouTube also has the distinction of being where people go to watch videos. YouTube is synonymous with videos on the internet – in a way that Spotify and Apple Music aren’t. These small steps are easing their users into the waters, prepping them for the deluge of video that’s coming.

Spotify and Apple are under pressure to build an all-encompassing music ecosystem to combat YouTube Music’s encroachment. It may not seem like a threat right now, but YouTube Music is growing faster than both. Enjoy your animated album art in the latest version of Apple Music and prep for the music videos that are coming next year.