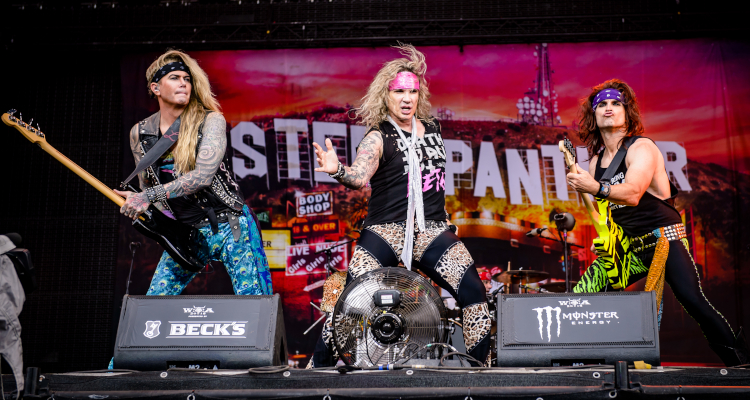 While many outlets are reporting that Steel Panther held three shows last week, it appears that the 20-year-old band booked a total of four concerts. The first took place at Destin’s Club LA (on Wednesday, December 16th), followed by gigs at Orlando’s Ace Café (on Thursday the 17th, with an appearance from NSYNC’s Joey Fatone), St. Petersburg’s Jannus Live (on Friday the 18th, with an appearance from WWE star and Fozzy lead singer Chris Jericho), and Fort Myers’ Ranch Concert Hall & Saloon (on Saturday the 19th).

Florida has comparatively lax lockdown measures and social distancing requirements in place, and the four-piece group’s string of performances is just the latest in a line of recent shows from The Sunshine State.

As was also the case with most of these other concerts, attendees captured a number of photos and videos, which quickly began circulating on social media. One such clip (from the St. Petersburg gig) appears to show a mostly mask-free audience enjoying the concert while standing close together. The same seems to have been true of the latter performance – though it bears mentioning that the second happening took place outdoors, with a high in Orlando that day of nearly 70 degrees.

“I’ve gotta say, as someone who has been a fan of theirs for over a decade and often told people how they’re lovely people, Steel Panther playing 3 shows to mostly maskless crowds has made me lose respect for them,” one individual wrote on Twitter.

“I’m just disappointed that Steel Panther did that concert. I used to be a fan of them, but not anymore. The association with [Chris] Jericho is just even more reason to not be a fan of them,” tweeted another former fan.

“Steel Panther tonight in Destin!!!! Hell yeah!!!” penned a different person yet, along with an image from the December 16th event.

At the time of publishing, Steel Panther hadn’t publicly commented on the pushback from the shows. The band did however post a new “What F—king Day Is It?” installment on Twitter earlier this morning.