Music Streaming In the UK Increased 8.2% In Locked-Down 2020 — But Not One Album Went Platinum 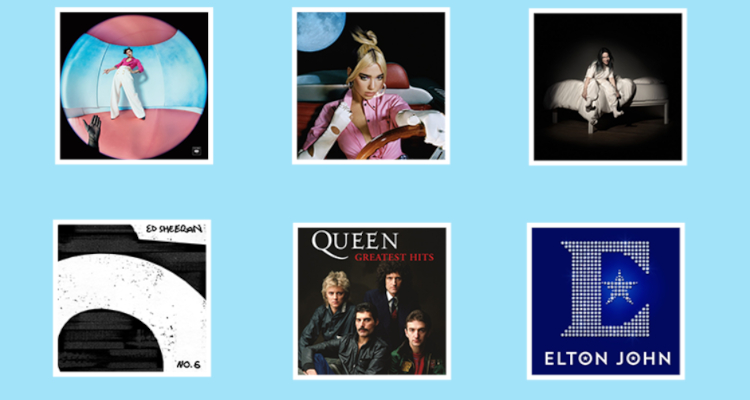 Some of 2020’s most popular albums in the UK. Photo Credit: British Phonographic Industry

Though music streaming in the UK increased by 8.2 percent in locked-down 2020, according to a new yearend report from the British Phonographic Industry (BPI), not one album went platinum.

The 8.2 percent year-over-year boost to music streaming in the UK helped 2020 become the sixth consecutive year in which music consumption has grown. In total, fans streamed or purchased approximately 155 million albums throughout the year, while individual streams hiked more than 20 percent compared to 2019, finishing at 139 billion.

Those are big numbers, though not enough to propel a single album into platinum status. The 2020 reporting period, it’s worth mentioning, consists of 53 weeks, to 52 weeks in 2019. The BPI certifies platinum albums that sell over 300,000 units (against 1,000,000 units for the RIAA’s platinum certification).

More broadly, streaming accounted for 80.6 percent of all UK music consumption in 2020. Lewis Capaldi’s Divinely Uninspired to a Hellish Extent (which released in May of 2019) topped the list of most popular albums, followed by Harry Styles’ Fine Line, Dua Lipa’s Future Nostalgia, Billie Eilish’s When We All Fall Asleep, Where Do We Go?, and Stormzy’s Heavy is the Head, respectively. (Fleetwood Mac’s 2018 50 Years – Don’t Stop finished 10th.)

The Weeknd’s “Blinding Lights” came in first on the “official singles chart” as well as the “most streamed audio tracks chart,” whereas Tones and I’s “Dance Monkey” nabbed the second position. (These songs also took the two uppermost spots on Spotify’s global “Top Tracks of 2020” list.)

On the physical front, vinyl records turned in their 13th consecutive year of growth in the UK, selling 11.5 percent more (approximately 4.8 million units) in 2020 than in 2019. (Stateside, vinyl appears poised to continue its own decade-plus growth streak, owing to strong sales figures through the halfway point of the year and a stellar commercial performance during the holiday season.)

Elsewhere in Europe, vinyl recorded a double-digit sales boost in Germany in 2019 – representing five percent of overall recorded music sales – and a 27 percent year-over-year jump in the number of individuals who streamed music. In France, vinyl suffered comparatively small losses in 2020’s opening half, with streaming revenues having increased by almost 18 percent from 2019’s initial six months.

In December, Heston-born Led Zeppelin founder and guitarist Jimmy Page called on streaming services to “make fair payments to all musicians.” The 76-year-old penned the corresponding Instagram post after watching multiple musicians speak before the Commons’ Digital, Culture, Media and Sport Committee, as part of its broader investigation into streaming royalties.