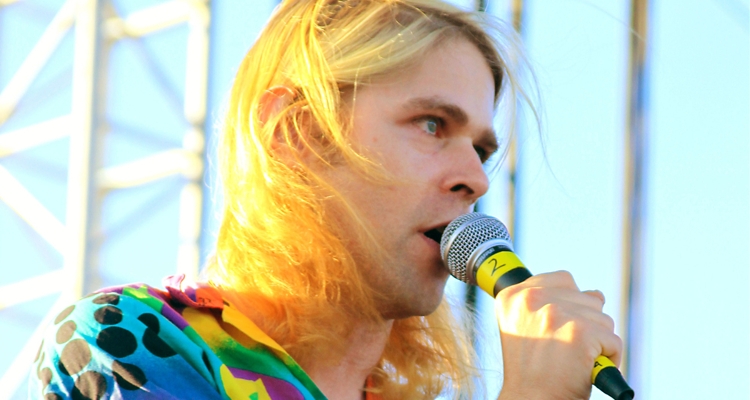 Indie rocker Ariel Pink says he’s ‘destitute and in the street’ after his label Mexican Summer dropped him for attending the pro-Trump rally that preceded the Capitol invasion.

Ariel Pink appeared on Fox News’ “Tucker Carlson Tonight” to complain about his woes. He says his label dropped him after he expressed support for President Trump. Pink says he’s unable to support himself due to a lack of touring because of the pandemic.

“I can’t tour either at this point,” Pink says. “So it pretty much leaves me destitute and on the street. I’m sort of overwhelmed right now, and I don’t know exactly what to do.” Carlson then tells Pink he is “taking a huge risk by coming on his show.”

“I don’t have any other recourse,” Pink tells Carlson. “What am I gonna do? Am I gonna be able to get my statement out in magazines? Right now the narrative is being pushed, and there’s not very many people that are gonna let a counter-narrative enter the fold,” Pink says, appearing to become emotional. “I had no choice. There’s nothing else for me to do. I can’t even afford my lawyer right now.”

Ariel Pink does have legal representation, according to a recent Pitchfork article. His attorney is quoted in a piece about an L.A. County Superior Court ruling against Pink over harassing his ex-girlfriend.

Pink attempted to get a restraining order against his ex, which was denied by the court. The court ruled that her claims against him were “constitutionally-protected activities” under California’s anti-SLAPP legislation. That legislation is designed to prevent intimidation through the courts. The court ordered Pink to pay Coe’s legal fees in that case.

During the interview on Carlson’s show, Pink’s legal woes were not mentioned at all. Instead, Carlson focused on Pink’s music career, which he says was destroyed by attending a Trump rally. Pink was at the January 6th rally in Washington D.C., but he did not participate in the Capitol riot that followed.

The label was facing mounting pressure to drop Pink over his numerous controversies. Pink had earlier faced backlash for comments that were perceived as homophobic, and his pro-Trump sentiments may have agitated Mexican Summer employees. When asked when he found out his career was destroyed, Pink says he was informed two days after attending the rally.