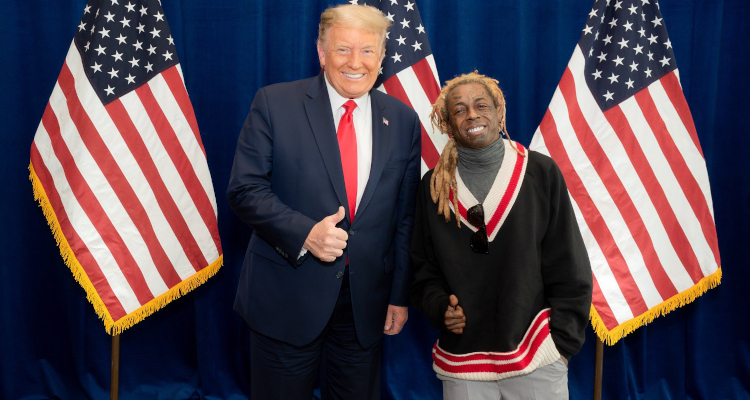 President Trump commuted the sentence of Michael Harris, also known as ‘Harry-O.’ He was convicted of attempted murder and kidnapping and has spent more than 30 years in prison. Trump also granted a commutation to Bill Kapri, better known as rapper Kodak Black. The rapper was convicted of weapons charges in Florida.

Rapper Lil Wayne received a full pardon from President Trump. Also known as Dwayne Michael Carter Jr, the rapper was in prison on weapons charges and previously announced his support of the President before the election. Also granted a full pardon was Desiree Perez, the CEO of Roc Nation.

“Ms. Perez was involved in a conspiracy to distribute narcotics,” the White House’s statement reads. “Since her conviction, Ms. Perez has taken full accountability for her actions and has turned her life around. She has been gainfully employed and has been an advocate for criminal justice reform in her community.”

Perez released a statement early Wednesday morning thanking the President for her pardon.

“I’m grateful to have received a pardon and to have formally closed that chapter of my life in the eyes of the law. I have taken full responsibility for my mistakes from 25 years ago, but I also take tremendous pride in my personal growth, perseverance, and accomplishments since then. This pardon reinforces my lifelong commitment to advocating for criminal justice reform and social justice initiatives,” Perez says in her statement.

Lil Wayne pled guilty in federal district court in December for illegally possessing a gold-plated handgun. Police raided Lil Wayne’s private jet when it landed in Florida. He was facing up to 10 years in prison on the charge. He previously served eight months in prison in New York on criminal possession of weapons charges.

Kodak Black was sentenced to 46 months in prison on federal weapon charges in 2019. Born Dieuson Octave, he admitted to lying on background check forms to buy multiple firearms.

Rapper Lil Yachty petitioned Trump to pardon Black, and promised a $1 million donation to charity if he was released. The rapper wasn’t among the Donald Trump pardons.

Snoop Dogg reportedly lobbied for the release of Death Row Records co-founder, Michael Harris. Oddly enough, everyone seems to have forgotten about Suge Knight, who is also serving a prison sentence on manslaughter charges.