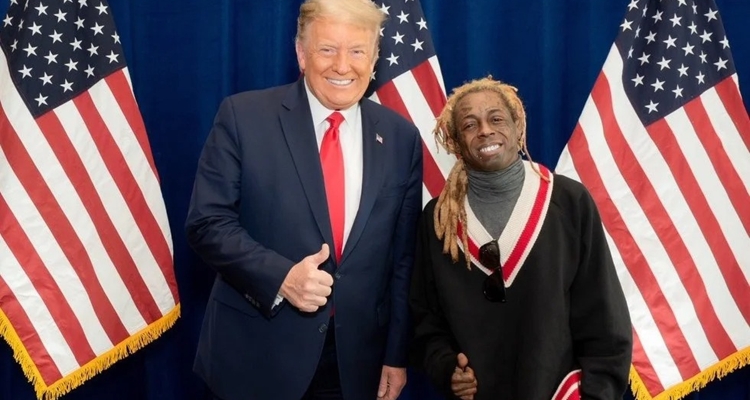 That news comes just days after Lil Wayne received an 11th-hour pardon shortly before Joe Biden took office. A year after Lil Wayne was arrested for possessing a loaded firearm as a felon, he met with then-President Trump.

The result is the photo you see above, which Lil Tunechi tweeted out to his millions of followers. It also culminated in an endorsement of the Trump campaign by the rapper, which caused a backlash.

Just a month later, Lil Wayne was formally charged with felony gun possession, to which he pled guilty. He faced up to 10 years in prison if convicted, but now, Lil Wayne is free of all charges. He and fellow rapper Kodak Black received pardons, along with Desiree Perez and Michael Harris. Perez is the CEO of Jay-Z’s Roc Nation, while Harris is the co-founder of Death Row Records.

When asked if Lil Wayne’s support of Trump was political, his lawyer disagreed. “He’s in the entertainment world,” Cohen said of the former President. “He’s got a style that’s similar in terms of the way that he carries himself, and a lot of rappers and people in the industry relate to that.”

Cohen says the felony gun possession charge was under investigation for nearly a year, but it wasn’t why Lil Wayne chose to support Trump. “It never hurts that someone gets a full understanding of an individual when they’re just looking at a piece of paper,” Cohen says. “In hindsight, I guess it worked out.”

Another lawyer who represented Lil Wayne last year, Howard Srebnick, says the pardon makes sense. “A pardon for Mr. Carter is consistent with the views of many jurists – including Supreme Court Justice Amy Coney Barrett – that prosecuting a nonviolent citizen for merely possessing a firearm violates the Second Amendment of the U.S. Constitution.”

Others supported Lil Wayne and backed the pardon application that Trump received.

Among signees in support of a pardon were Deion Sanders and Brett Berish. Both highlighted the rapper’s charitable giving as viable reasons for clemency. Mr. Cohen reveals that he started the application for the Lil Wayne pardon shortly after Lil Wayne was charged in November.

Bradford Cohen also represents Kodak Black, another rapper pardoned by Trump. His 46-month sentence for lying on a background check while trying to buy a gun was commuted.