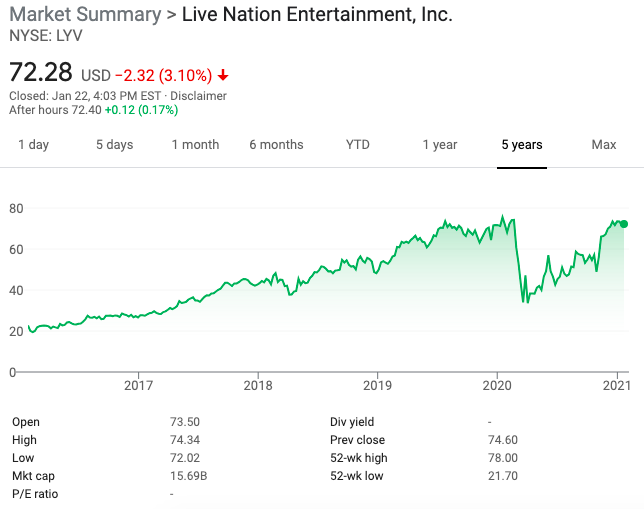 Live Nation stock (LYV) has recovered the entirety of its 2020 losses – and briefly touched a record high of $78 per share.

Live Nation stock (LYV) began 2020 at nearly $72 per share – up from about $50 per share in early January of 2019 and, more broadly, about $23 per share in January of 2016. But LYV dipped as low as $21.70 per share in March of 2020, during the domestic onset of the novel coronavirus pandemic, and shares didn’t approach $70 apiece again until late November of the same year, following news of Pfizer’s successful COVID-19 vaccine clinical trials.

December brought further gains, and as mentioned, the first month of 2021 has seen the Ticketmaster parent company’s stock surpass its pre-COVID worth; LYV shares finished today at $72.28 apiece. And while Live Nation stock’s record high of $78 per share arrived on Tuesday the 19th, even the current LYV price is up from January of last year.

The continued rollout of COVID-19 vaccines – in coordination with fans’ apparent interest in returning to traditional concerts and music festivals – looks to be boding well for the prospect of live music returning to scale later in 2021. And needless to say, the point is also significant, financially and otherwise, for musicians, behind-the-scenes professionals, and promoters alike. (Live Nation has stated in multiple earnings reports that it’s banking on a summer of 2021 return for non-socially distanced live music.)

Additionally, Live Nation on Tuesday (the same day that LYV reached an all-time high) announced that it had acquired a majority stake in Veeps, a ticketed livestream platform created by Good Charlotte cofounders Joel and Benji Madden. It’s possible that investors rallied behind Live Nation as a result of this play, and specifically because CEO Michael Rapino indicated that his company will begin selling tickets to livestream editions of physical shows.

And on the analyst side, some financial professionals have in recent days expressed generally positive opinions of Live Nation’s long-term outlook.

Also on Tuesday the 19th, Ritholtz Wealth CEO Josh Brown relayed that “there’s a lot of upside” associated with LYV, besides acknowledging that he has a stake in the Beverly Hills-based company for the first time. Additionally, Evercore analyst Vijay Jayant downgraded Live Nation’s rating from “outperform” to “in line” – while also upping his target price from $64 to $75, however.

Liberty Media, which owns about one-third of Live Nation as well as over 70 percent of SiriusXM, rolled out a $500 million IPO today for its newly formed Liberty Media Acquisition Corporation subsidiary. The stock, traded as LMACU, experienced an almost 28 percent boost on the day, with shares having increased from $10 to $12.75 apiece.