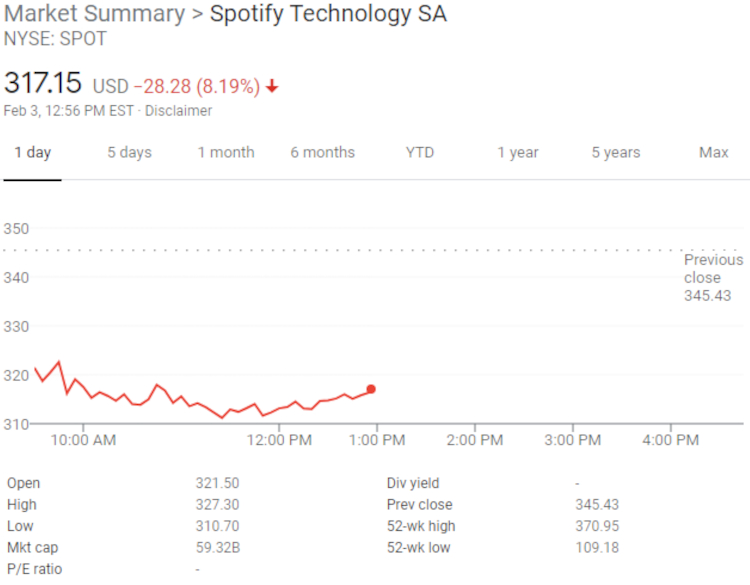 Spotify revealed its much-anticipated Q4 2020 earnings specifics this morning, and at the time of publishing, Spotify stock was trading for $317.15 per share – down some 8.2 percent from Tuesday’s closing price of $345.43.

In terms of user growth, the platform added 25 million monthly active users (MAUs) during the final three months of 2020, 11 million of whom were premium subscribers. (2020’s third quarter brought an additional 21 million MAUs and six million paid users, for reference.)

From Q4 2019, Spotify’s overall MAUs were up 27 percent, including 24 percent growth for premium subscribers and 30 percent growth for ad-supported MAUs. Additionally, quarterly revenue was up 17 percent year over year – though average revenue per premium user, $5.12 (€4.26), declined eight percent between Q4 2019 and Q4 2020.

Geographically, 35 percent of MAUs are now based out of Europe (compared to 34 percent in Q3). North America parted with the one percent MAUs share, dropping to 24 percent, while Latin America held constant at 22 percent of MAUs and “Rest of World” accounted for the remaining 19 percent of users.

And on the podcasting front – a point of particular interest for investors, given that Spotify invested many millions on non-music audio entertainment in 2020 – 25 percent of MAUs “engaged with podcast content” during the fourth quarter (up from 22 percent in Q3).

2.2 million podcasts are available on the platform (against 1.9 million in Q3), but the relatively slow podcast-listenership growth may have contributed to Spotify stock’s post-earnings report dip. Worth noting is that the 25 percent podcast-interaction figure doesn’t necessarily represent start-to-finish listens – it’s unclear how many users actually played the programs in their entirety – and new episodes of The Joe Rogan Experience became available exclusively through Spotify in December.

December also marked “the single biggest month ever” for Spotify’s sponsored recommendations, and the total number of sponsored-recommendation campaigns increased by over 50 percent during the quarter. Premium churn rate, which fell beneath four percent for the first time in Q3, was “up modestly” in the fourth quarter. And as of Q4’s end, Spotify employed 6,554 full-time team members.

Finally, higher-ups specified that they expect Spotify to have between 354 million and 364 million MAUs at Q1 2021’s end, compared to 345 million MAUs presently. The platform’s premium-subscriber guidance, at 155 million to 158 million paid users, was even more noteworthy, given that the lower-end figure represents the current number of Spotify subscribers.