Yes, Composers Can Make Money In Sports — Meet One of the Top Programmers In the Field 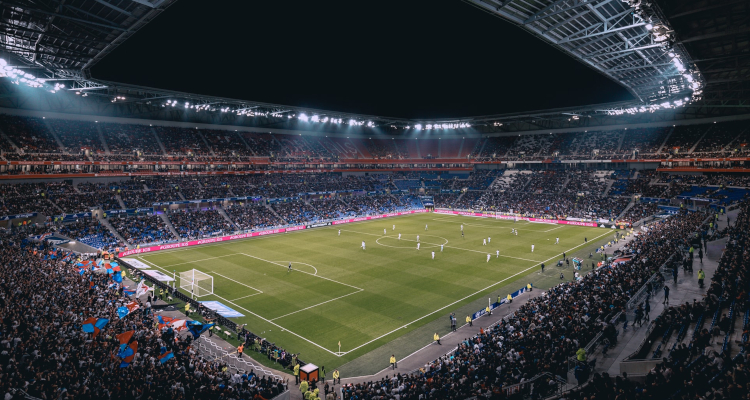 A number of artists are scoring paychecks – and potentially career-changing exposure – from film, television, and video-game sync placements. But according to one veteran music supervisor, it’s also possible for creators to make money (and connect with fans) by writing music for sports.

Former Sky TV senior music supervisor Justin “Commie” McMullen shed light upon the nuances of writing music for sports and, on the other side, selecting songs for much-anticipated games, high-octane promos, and more, in a recent interview.

Early in the roughly 45-minute-long sit down, the Cuesongs director of music described the sporting events and media that behind-the-scenes professionals most closely focus on when looking for suitable tracks.

“For broadcast, certainly at Sky, there was a lot, you know? Because you have all the different sports, you have all the different types of programming,” said Commie. “Generally, the effort goes into the matches. Or the promos for the matches, or the big cut this summer, the big season launches. I mean, the season launches for Premier League were always the biggest musical ticket to win.”

This information could prove useful to creators as they write and record music for sports, build relationships with music supervisors, and time their releases and submissions so as to maximize the chances of placement success. In terms of the latter, McMullen emphasized the song-selection process’s many moving parts.

“The producers would come in on Monday or Tuesday and say, ‘Right, this is sort of the editorial story. Can you come up with some suggestions?’ Or they would know what they want. And then you had a separate promos department who were thinking a month ahead, saying, ‘Right, this is what’s coming up. We need some music to convey this message,’” he continued.

“Musically it could be anything. But always energy,” he said of the type of music that sports-broadcast professionals select.

“Certainly with promos, sports promos, all types of promos and trailers, they work on that levels basis. It has to have range, and it has to go from down there, to up there, to drop a bit, to go back to sort of the big finish.”

But in a noteworthy contrast to the songs that music supervisors select for film, television, and video games, Commie specified that sports producers prioritize suitability over popularity.

“I think sports producers are less driven by having the next big thing or being particularly sort of clever or artistic. I think they want something that sticks editorially,” he stated.

Besides offering placement opportunities to up-and-coming artists and established acts alike, sporting events and content also differ from film, television, and gaming sync in that they don’t require artists to associate themselves with a particular brand or project.

“It was just something that wasn’t controversial,” Commie said when explaining artists’ clear-cut willingness to have their music paired with games and promos. “You’re not associating yourself with a brand. You weren’t putting yourself behind a product.”

Bearing these points in mind – sports placements reach broad audiences, are available for any stylistically well-matched music, and are typically free of usage-related headaches – McMullen disclosed some advice for composers who’re looking to secure paychecks (and possibly earn a living) by writing music for sports.

“If you’re a composer, a lot of the broadcasters are now creating their own music libraries. So if you’re more of a composer, I guess you can approach them and then pitch yourself to work. The terms aren’t often great, but it’s a way to certainly get in and get your music – if you’re looking to just go, ‘I got my music on the football,’ then as a composer that’s the best way to do it.

Lastly, in describing which tools he believes sports-focused music supervisors should have at their disposal, Commie effectively summed up the ways that creators can craft the perfect music for placements.

“Don’t overcomplicate it,” said McMullen. “You think very much, generally with sport, you think in the box. … It just has to bang.

“You’ve got to love sport, and you’ve got to understand what makes it work,” concluded the 20-year industry veteran.