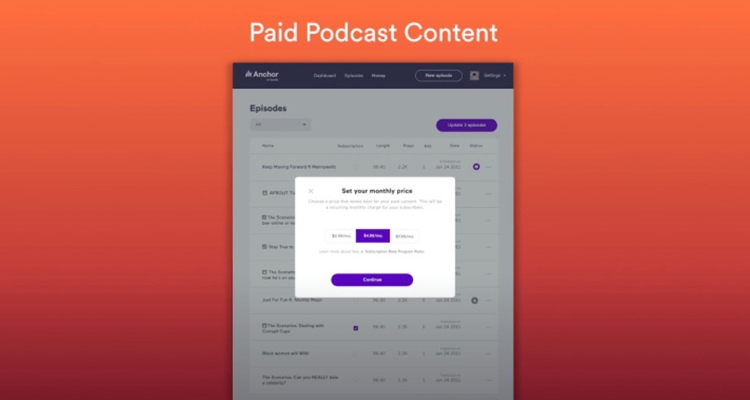 Spotify acquired Anchor, a podcast creation platform, back in 2019. Now it will test a new feature on that platform to allow U.S. creators to publish paid podcast content aimed at dedicated fans. The signups for the beta program opened yesterday.

Digital Music News has reported on the potential for paid podcast subscriptions at Spotify for about a year now. Spotify has been hinting that’s the direction it sees itself going. During the Q4 2020 earnings call, Spotify specifically mentioned podcast subscriptions and a la carte payments as potential new revenue sources. At the time, Spotify refused to go into more detail about how those revenue sources would work.

It appears as though Anchor’s paid podcast subscriptions would be focused on bonus content. That’s not so different than what some podcasting networks do. For example, Stitcher offers a free service and Stitcher Premium, which is ad-free with bonus episodes for fans. Anchor co-founder Michael Mignano says he believes paid bonus material could work well to monetize podcasts.

“We have found that, through our research, it seems to work especially well for creators who have really engaged and dedicated audiences – regardless of the audience size,” Mignano told TechCrunch, following Spotify’s announcement. “We’ve also found that podcast listeners do tend to be open to financially supporting the shows they love.”

The model will involve a revenue share between creators and Anchor, but creators will receive the majority of earnings. Anchor will allow creators to set the price for their listeners and determine what that experience should include. Bonus episodes, interviews, and even ad-free content are on the board as offerings. For now, the offering will be limited to those who use Anchor to record and publish across podcast platforms.

It’s not too surprising that Spotify is considering new monetization with Anchor – creators were leaving in droves. Digital Music News reported on the exodus of podcast creators from Anchor after sponsorship deals dried up. One podcaster told us that Spotify was their only sponsor for more than six months on the platform.

Spotify is hoping that by making the process of paid podcasting subscriptions easier, fans are more likely to sign up. No one wants to enter their credit card details on some dodgy third-party site to sign up for extra outtakes. But another Spotify subscription for podcasts? That might be acceptable to some people who really, really love their podcasts.