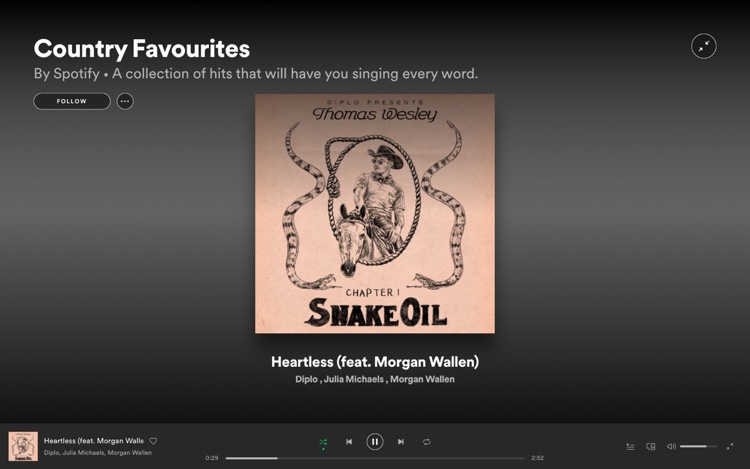 It looks like Spotify is ever-so-slowly reinstating Morgan Wallen back into its country playlist stack.

Spotify initially scrubbed Morgan Wallen from its curated country playlists in early February, after the country star was filmed uttering the n-word. Now, the streaming giant is slowly reintegrating Wallen back into its stack, with ‘Country Favourites’ (with nearly 190,000 followers) the latest to quietly reintegrate the singer’s music. Just last week, Spotify re-added Wallen’s song ‘Somebody’s Problem’ to its ‘Country Coffeehouse’ playlist, which boasts 600,000 followers.

An unexpected player in this drama is Diplo, who caught considerable flack for playing his Morgan Wallen collaboration track at a Super Bowl party. But that track — ‘Heartless (feat. Morgan Wallen)’ — is now popping up on Country Favourites. The song, which also features Julia Michaels, blends Morgan Wallen’s country twang into a trap-infused EDM mix (incidentally, EDM DJs have long been interested in country fusion, of which this is the latest example).

The Diplo track was quietly reintegrated with little fanfare, just like ‘Somebody’s Problem’ was subtly re-slotted into Country Coffeehouse. In fact, it appears that the Diplo collaboration was actually re-added on February 19th, with an eagle-eyed tipster sharing the add with DMN this morning. The move strongly suggests that Spotify is planning a broader reintegration into other playlists, with ‘Hot Country’ the big kahuna. Hot Country boasts nearly 6.3 million followers, but remains Wallen-less.

Incidentally, it’s worth mentioning that Spotify has never issued any statements on Wallen, though the platform clearly yanked Wallen’s music from its coveted playlists after the racial slur came to light.

Those bans haven’t been without business ramifications, however. Earlier, we reported that country radio stations across America were fielding angry and threatening calls from Morgan Wallen fans, with many fearful of losing dedicated listeners. That prompted at least one station — 96.7 Merle FM in Knoxville, TN — to break ranks. The station polled its listeners on the Wallen ban, and found that 92% of its audience wanted it lifted. Soon afterward, Merle reinstated Wallen into heavy rotation. Other radio stations haven’t followed suit, however.

But none of that seems to matter for Wallen, whose cancellation is causing a boom in attention and sales. The singer’s Dangerous: The Double Album has been number one across multiple charts for seven-straight weeks. According to MRC Data, Wallen is easily the best-selling artist of 2021, outranking pop megastars like Ariana Grande and The Weeknd.