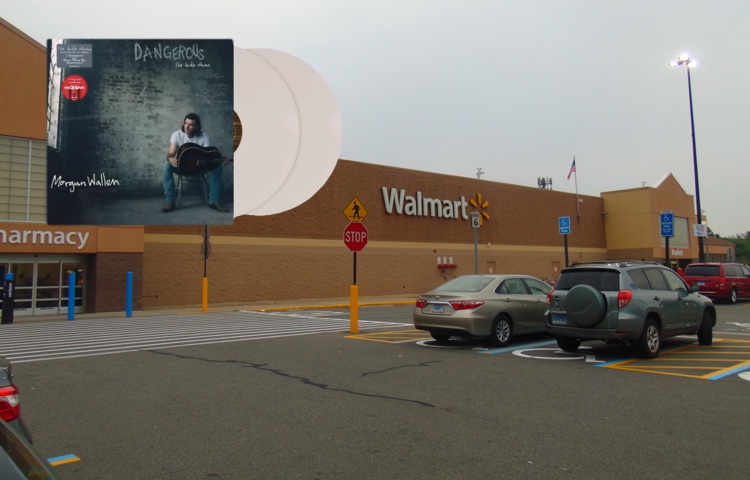 Walmart has now exhausted its entire supply of Morgan Wallen Dangerous double-vinyl LPs — with each carrying a $34 price tag.

Morgan Wallen’s unexpected sales surge is spreading into some unexpected formats. That includes vinyl LPs, a format that typically produces the highest financial returns for artists and their labels. As of this morning, Walmart — a store known for stocking a lot of inventory — has exhausted its nationwide supply of Morgan Wallen Dangerous: The Double Album vinyl LPs. Walmart has now pulled its online page for the album, and it doesn’t appear that supplies will be replenished.

The price for the double-disc was $34, which sounds pricey but is actually moderate by vinyl aficionado standards. But for those that have extra cash to spend, we also spotted a $119 limited-edition double-disc of Dangerous, which was about sell out. Now, it’s likely that Wallen’s label, Big Loud/Republic (UMG) — which supposedly ‘suspended’ Wallen in February — will ramp up production on another high-priced batch.

If that doesn’t happen, however, the double-discs could easily become collector’s items, with skyrocketing prices on platforms like eBay and Discogs.

The Walmart news comes as Dangerous enters its seventh-straight week atop numerous album sales charts in the U.S., including the Billboard 200. That streak looks likely to keep going, with Wallen easily outpacing sales by pop superstars like Ariana Grande. According to MRC Data, Morgan Wallen is now the best-selling artist of 2021.

A major part of that success is actually coming from streaming platforms like Spotify. As of this week, Wallen has been banned from virtually every radio station in America, though his music remains readily available online. Spotify, Apple Music, and other streaming platforms stopped short of removing the country star’s music, instead choosing to remove him from their marquee playlists. That is undoubtedly lowering listens by country fans who aren’t dedicated Wallen fans, but it’s doing little to dampen listening by those that are.

In response, Spotify is now relaxing its playlist ban in a potential bid to keep subscribers and steal customers from rivals like Apple Music. Last week, the platform reinstated Wallen into its Country Coffeehouse playlist, which draws nearly 600,000 followers. They’ve also slotted a Wallen track into their Country Favourites curated playlist, which has nearly 200,000 followers. Now, the big question is whether Spotify will reintegrate Wallen into its marquee country playlist, Hot Country, which boasts more than 6 million followers.