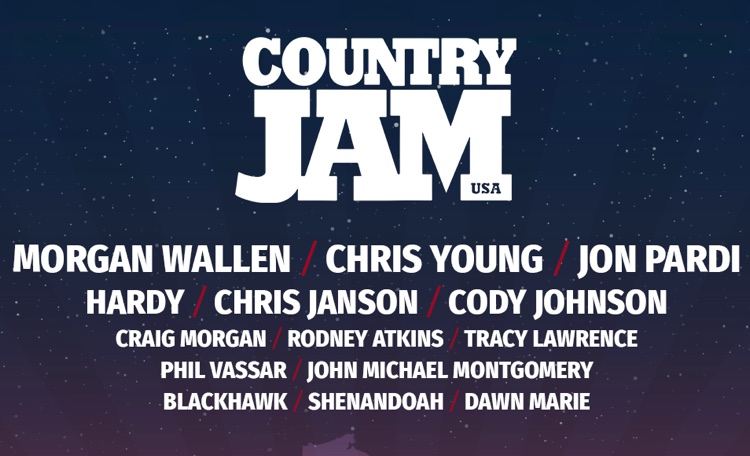 Despite heavy pressure to drop Morgan Wallen, Country Jam USA is keeping the country artist as a marquee headliner — and they’re not alone.

Last month, we first reported that Morgan Wallen had been dropped by his high-profile touring agent, William Morris Endeavor. But others in the live concert space — including country music festivals — don’t appear to be taking WME’s lead.  That includes Wisconsin-based music festival Country Jam USA, which has opted to keep the country singer as a marquee headliner despite heavy pressure to drop him.

Despite some chatter of the festival quietly planning to drop Wallen, it now appears that Country Jam USA has doubled down and kept the country singer on the bill. The festival, based in the west-central Wisconsin city of Eau Claire, plans to hold its country gala starting July 15th. Wallen will headline alongside Chris Young, Jon Pardi, Chris Janson, Cody Johnson, and Hardy, though Wallen is clearly being presented as a star attraction.

Wallen is unlikely to receive any support from local country radio, however.

In the moments after Morgan Wallen was filmed uttering the n-word outside of his residence in Nashville, major radio conglomerates like iHeartRadio, Cumulus, and Entercom unilaterally removed Wallen from its playlists. Only a smattering of smaller stations kept Wallen in rotation, and Wallen also found himself removed from high-profile playlists on Spotify, Apple Music, and Sirius XM.

That provoked a surge of support for Wallen, whose recent album, Dangerous: The Double Album is now likely to enter its eighth-straight week at number one.  According to MRC Data, Wallen is now the best-selling artist of 2021, with multiple songs exploding on streaming platforms.

That is a scene being closely observed by Country Jam USA, which is witnessing a country crowd demanding Wallen’s reinstatement. And despite heavy pressure to remove Wallen from the bill, organizers are likely siding with ticket-buying fans, who might demand refunds if Wallen were nixed.

Others are also getting the memo. Just recently, Knoxville, TN-based station 96.7 Merle FM reinstated Wallen after polling its listeners on the matter (92% said they wanted Wallen put back in rotation). But perhaps more surprisingly, Spotify has been slowly reinstating the singer into its coveted playlists, while pushing enhanced album versions to core Wallen fans.

But country music festivals, who cater exclusively to dedicated country music fans, have mostly stood their ground from the beginning. Country Thunder, which hosts large country festivals in Wisconsin, Arizona, Florida, and Canada, also remains committed to keeping Morgan Wallen on the bill. And beyond the mega-events, Wallen is prepping to go on a massive tour supporting Luke Bryan starting in June (COVID-permitting). Those tickets are readily available on Live Nation-owned Ticketmaster, which opted not to sever its relationship with the singer.