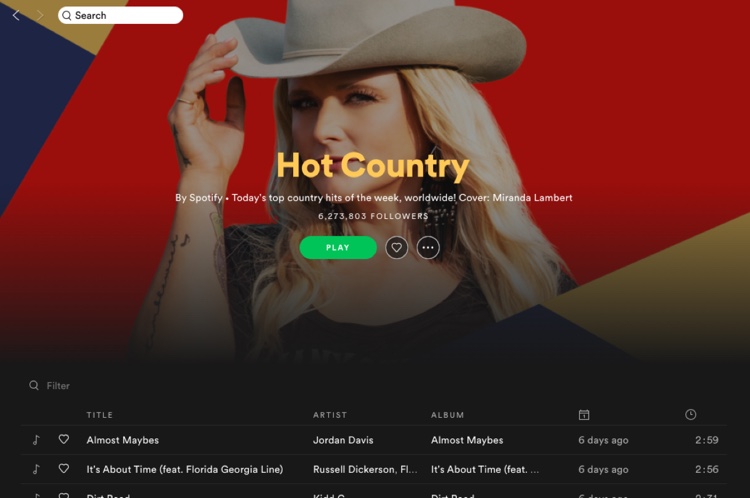 Over the past few weeks, Spotify has been quietly reinstating Morgan Wallen into a number of high-ranked country playlists after removing him in early February. But the company is stopping short at Hot Country, easily its largest playlist in the genre.

It looks like Spotify is only willing to reinstate Morgan Wallen to a certain extent. Over the past few weeks, we’ve reported on reinstatements involving multiple Spotify country playlists, as well as the release of enhanced versions of Wallen’s latest album, Dangerous: The Double Album.  But Digital Music News has now learned that Spotify is stopping short of reintegrating Wallen into Hot Country, given the “bad optics” of the situation and aggressive pushback from its own employees.

Country fans on Spotify will know Hot Country as the big kahuna of country playlists on the platform. It’s essentially what Rap Caviar is to rap and hip-hop, and boasts an impressive 6.24 million followers. Indeed, any country artist slotted onto Hot Country is likely to experience an immediate bump in attention and fans — though Spotify is now understood to be blocking Wallen from the playlist entirely with no longer-term plan for reinstatement.

The decision comes despite heavy demand for Wallen’s music on Spotify’s platform.

The singer remains a mainstay on Spotify’s rankings of most-played artists and songs, in spite of— or more likely because of — the artist’s mass-cancellation by the music industry in February. On Spotify’s ranking of most popular songs in the US, for example, Wallen’s “Wasted on You” has recently been ranking alongside songs by mainstream hip-hop and pop artists like Drake, Cardi B, Ariana Grande, Juice WRLD, and Justin Bieber. Other Wallen songs are also performing well, with multiple tracks surging past 100 million streams and powering a record-setting 9-week run for Dangerous atop multiple album charts (with a 10th likely ahead).

Despite some serious competition, Morgan Wallen remains the best-selling artist of 2021, and has already notched an all-time sales record in the country music genre.

That’s undoubtedly putting pressure on Spotify to reinstate the artist into country playlists, though it now appears that the company is calculating a delicate balancing act. In early February, Spotify removed Wallen from all of its curated playlists, though the company also released an expanded version of the artist’s ultra-popular album. That release appeared to be coordinated with Wallen’s label, Big Loud/Republic (Universal Music Group), which “indefinitely suspended” the artist in February.

Despite the limited playlist reintegrations, DMN is also learning that Spotify may be benefitting from a large migration of Morgan Wallen fans who have ditched their local country radio stations.

Earlier, Wallen was removed from virtually every radio station in America. But that prompted a massive backlash from listeners, along with threats to stop listening entirely.  In response, multiple stations across the United States have quitely (or not-so-quietly) reinstated Morgan Wallen, even in defiance of corporate orders.

One company refusing to budge is the Academy of Country Music, a group that banned Wallen from awards eligibility after the artist was filmed uttering the n-word last month. Accordingly, Wallen will be conspicuously absent from April’s Academy of Country Music Awards, despite the artist’s recent record-breaking successes. Just last week, the Academy doubled down on its ban, and reportedly requested that Wallen’s name not be mentioned before, during, or after the awards show broadcast.