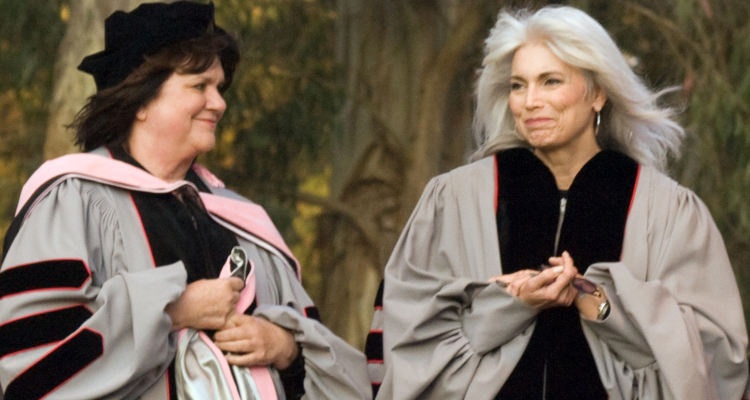 Linda Ronstadt (left) receiving an honorary doctorate of music from the Berklee College of Music in 2009. Photo Credit: Eric Frommer

Iconic Artists Group (IAG) formally announced the high-profile catalog acquisition this morning. Neither party specified the financial terms of the deal, but the transaction encompasses all the masters that the Tucson, Arizona, native Linda Ronstadt owns from across her approximately four decades in music, as well as her share of royalties from masters that she does not possess.

After arriving on the music scene as one-third of The Stone Poneys’ original lineup during the latter half of the 1960s, the 11-time Grammy winner (and 27-time nominee) Ronstadt began her highly successful solo career with 1969’s Hand Sown … Home Grown. The one-time Golden Globe and Tony Award nominee, who provided backup vocals on Neil Young’s “Heart of Gold,” then rose to mainstream commercial prominence with her fifth studio album, 1974’s Heart Like a Wheel.

Linda Ronstadt has released 24 albums as a solo artist, the newest of which, Hummin’ to Myself, debuted in 2004 – though she also collaborated on Adieu False Heart with Ann Savoy in 2006. And according to the RIAA, the 74-year-old has sold 30 million records to date, with 1976’s Greatest Hits having been certified seven times Platinum.

At about the same time, Round Hill Music raised hundreds of millions of dollars to acquire music IP of its own, announcing agreements with Atlanta-based rock band Collective Soul and veteran songwriter Jim Vallance to kick off 2021.

During the last month or so, however, Azoff’s Iconic Artists Group has made headlines for finalizing catalog deals, beginning with securing a “controlling interest” in both The Beach Boys’ recorded catalog and IP (with the latter referring to “select musical compositions and memorabilia”). IMG reportedly paid between $100 million and $200 million in the transaction, but an official figure hasn’t been made publicly available.

And earlier this month, The Byrds cofounder David Crosby cashed in on his music IP by selling to Iconic Artists Group, calling the corresponding deal “a blessing.”