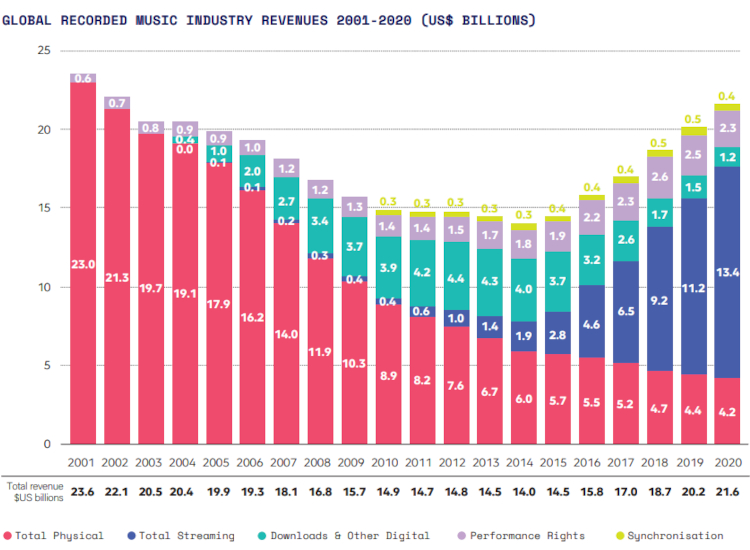 The International Federation of the Phonographic Industry (IFPI) has revealed that worldwide recorded music revenue grew by 7.4 percent year over year in 2020, with streaming having accounted for north of 62 percent of the total.

The 88-year-old organization introduced this and other noteworthy recorded music industry stats in its newly published Global Music Report. According to the breakdown, 2020 music revenue finished at $21.6 billion – the largest figure delivered by any year since 2002 – in spite of small year-over-year dips in public performance, sync, and physical, owing to the pandemic.

A strong showing from streaming, which generated $13.4 billion (19.9 percent YoY growth), was more than enough to offset these declines, however, and the London-headquartered IFPI also reported an 18.5 percent boost to income from streaming subscriptions, compared once again to 2019. Music services boasted a combined total of 443 million paid users at 2020’s end.

The category’s improvement is attributable to the ongoing vinyl resurgence, as the format’s revenue improved by 23.5 percent from 2019. CDs, for their part, produced 11.9 percent less income in 2020 than they did in 2019.

Geographically, eight of the 10 leading music markets continued to grow in 2020, and China quietly assumed the number-seven spot, surpassing the Netherlands, Australia, and Canada while directly trailing South Korea. Breaking down the music industry’s 2020 performance by region, Oceania (with comparatively modest 3.3 percent YoY growth) just trailed Europe (3.5 percent YoY growth, with the UK, Germany, and France having contributed 59.5 percent of the continent’s total).

Lastly, in terms of the top-performing artists, albums, and songs of 2020, BTS led the IFPI list of bestselling artists, followed by Taylor Swift, Drake, The Weeknd, and Billie Eilish, respectively. Nevertheless, The Weeknd’s Grammy-less “Blinding Lights” still managed to top the digital-single charts, with 2.72 billion streams to its credit. Tones and I’s “Dance Monkey” took the number-two spot, with 2.34 billion streams, to Roddy Rich’s third-ranked “The Box” (1.67 billion streams).

BTS also finished first on the all-format chart for albums, with Map of the Soul: 7, in addition to taking the number-one slot on the chart of top-10 albums by sales, with 4.8 million Map of the Soul: 7 units having been moved. The deluxe edition of the K-pop mainstay’s BE placed second on the latter list, and notably, Blackpink’s The Album took the fifth spot, right behind Taylor Swift’s Folklore.