The potential career benefits of securing placements on coveted Spotify playlists are greater than ever – but so are the pitfalls associated with consulting unreliable third parties to obtain quick streams. With that in mind, we teamed up with Playlist Streams to help artists and indie labels figure out how to safely add their work to Spotify playlists.

Just days into 2021, thousands of indie artists received an unwelcome surprise when their music was removed from Spotify due to alleged artificial stream violations. The swift, unexpected purge affected hundreds of thousands of tracks, and more than a few creators publicly lamented losing access to the platform’s more than 345 million users.

Equally as important, a substantial portion of the impacted artists denied using a prohibited service to inflate their stream totals – only to realize, upon taking a closer look, that they and/or their team had tapped an undependable business or individual in pursuit of commercial success.

The unfortunate episode underscored the significance of working exclusively with trusted service providers, especially when it comes to Spotify playlists – a point that PlaylistStreams, a leading driver of organic playlist placements, has long emphasized. Besides setting the stage for authentic fan engagement and career growth, above-board music-promotion companies shield creators from unexpected takedowns and debilitating professional obstacles.

PlaylistStreams has powered streaming platform success for a range of successful artists over a period of years — so they weren’t surprised to see the recent Spotify purge. But how can an artist or label ensure that playlist promotion won’t get penalized by Spotify (or other platforms)?

To answer that question, we asked PlaylistStreams to help us list the cardinal rules for safely getting integrated into Spotify playlists. Read on.

Any Spotify playlist-placement offer that seems too good and/or cheap to be true probably is – meaning that creators who use such a service stand to lose a little bit of cash up front and, more pressingly, encounter career hurdles down the line.

One would be wise to forgo purchasing an extreme number of streams for $5, for instance; when in doubt, opt out. Empty, bot-driven streams are cheaper (and easier to produce) than real fan engagement, and needless to say, they bring considerable risks and none of the potential advantages that come with genuine interest.

“Over time, people are going to realize that there are no shortcuts to success. You have to put the work in,” PlaylistStreams founder Nigel Sparkes told Digital Music News. “It’s one fan at a time.”

Building upon the point, playlist services involving bots and/or non-human interaction come with ample risk and little upside. At the end of the day, it’s fans who support music, whereas disreputable playlist placements and fake plays are capable solely of getting tracks banned from leading platforms and tarnishing artists’ reputations.

In that context, PlaylistStreams works to weed out botted playlists, ensuring that each playlist in its network is real, organic, and powered by both a committed curator and dedicated fans.

3. If a Service Doesn’t Look Legit, It Probably Isn’t

Spotify playlist services that don’t look legit probably aren’t. Poorly designed interfaces, the absence of customer-support options, and, perhaps most notably, the lack of an explanation as to how the platform at hand operates are telltale indications of untrustworthy operations.

Don’t hesitate to ask an abundance of questions when selecting a playlist-placement service, including key inquiries such as “Do you personally vet the playlists?” and “Is there a human and/or team analyzing and placing tracks, as opposed to an algorithm?”

4. If There’s Even a Chance That a Playlist Service Isn’t Legit, Don’t Take the Risk

Upon noticing any sign at all that a playlist service isn’t legit, it’s best to avoid the risk and search for a more suitable option – particularly because it’s easier to zero in on services’ promised benefits (streams and fans) than it is to objectively gauge their potential drawbacks.

As is the case with so many components of the music industry – from signing contracts to optimizing metadata and much in between – it’s better to be safe than sorry.

5. If a Song Isn’t Gaining Traction, It Might Not Be Right for Playlist Services

Some tracks are inherently well-suited for playlist services (and broader streaming success), while other songs, for reasons involving everything from timing to style, will fail to achieve results from placements. This possibility is a natural byproduct of organic playlist promotion that’s worth considering at the outset.

“We put your music in front of real people – they’re going to like the track or not,” Sparkes bluntly told DMN.

To be sure, PlaylistStreams analyzes each song that it receives – and respectfully passes on those that it doesn’t believe have a clear path to prominence through a campaign. When the company does accept a track, however, its account managers utilize a personalized playlisting strategy to find mixes curated by individuals who are excited about adding the work to their playlist.

This excitement, in turn, can transfer to playlist followers and spur additional placements yet. “We’ve seen our clients rocket from 10 playlists to over 400 playlists using our organic strategy,” Sparkes added. 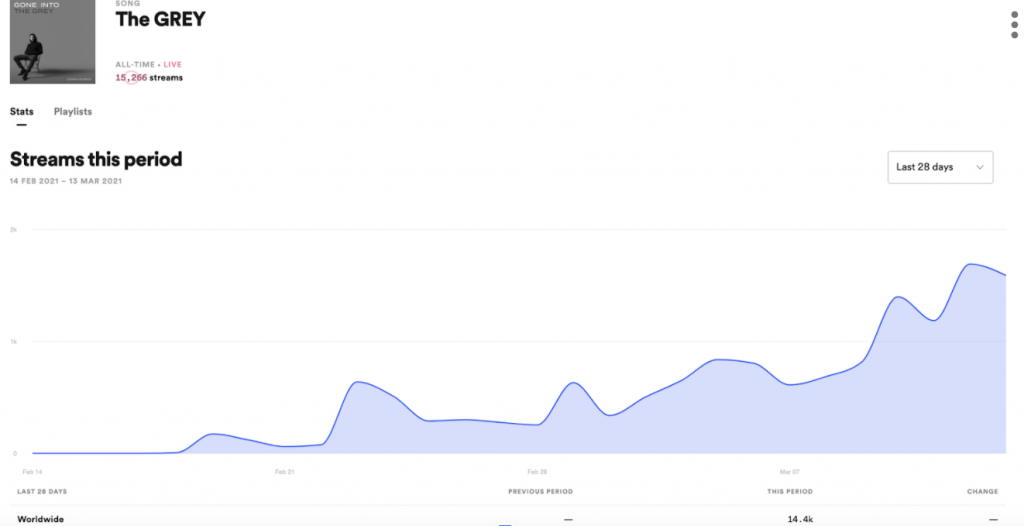 ‘The GREY,’ by Johnny Burgos, DJ Skizz, and Leo Coltrane, enjoyed a major playlist and streaming surge after working with Playlist Streams (click to enlarge).

6. 20,000 Overnight Streams Usually Represent a Quick Way to Get Banned – Not an Opportunity

Playlist services that offer 20,000 streams (or more) overnight, most likely for an unrealistically small fee, typically represent a quick way to get banned from Spotify – not an opportunity to effectively promote music.

The lone exception to the rule, of course, is when the service is legitimate and its listeners are organic. Bear in mind, though, that this type of high-volume delivery will feature a hefty price tag, as bots are cheap to mobilize and potential fans are not.

Real, organic fans should be artists’ sole focus when it comes to Spotify playlist services. Bot-driven plays are easy and inexpensive to come by, but they’re free of actual results and are unable to produce true fan interest.

It’s not difficult (or uncommon) for a massive number of potential streams to catch an artist’s eye, but these artificial plays cannot use social media, purchase merchandise, or attend concerts. On the other side of the coin, modest organic growth has the potential to reach all manner of potential supporters and pave the way for career achievements moving forward.

8. If You Do Get Flagged, There’s Little Recourse – So It’s Best to Stick With Legitimate Services

As initially mentioned, the pitfalls associated with (even unwittingly) using an unreliable, bot-driven Spotify playlist service are greater than ever before. For all intents and purposes, Spotify is the judge, jury, and executioner, removing the entirety of an artist’s songs – not solely those that were spiked – when manipulated plays are discovered.

Raising the stakes further, artists no longer have a chance to fight back against fake-stream allegations and music removals, which now go directly through distributors. And while that doesn’t make it necessary to forgo playlist services, it does mean that creators must be sure of a service’s trustworthiness at the outset.

Provided that a Spotify playlist service checks all the boxes and emphasizes real, verifiable, and organic plays, there’s no reason for artists to delay setting themselves up for success in today’s streaming-driven music landscape.

If you’re interested in working with Playlist Streams, here’s a good place to start.