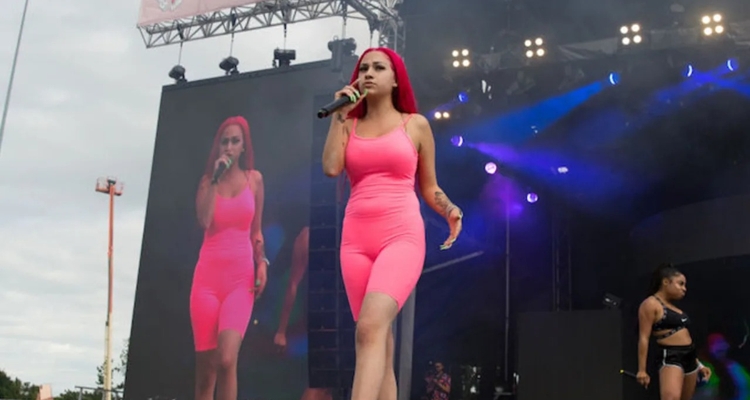 Rapper Bhad Bhabie has racked up more than $1 million in six hours after joining OnlyFans.

The teen rapper posted a screenshot late Thursday night, showing her earnings from the platform. That included $757,526.08 from subscriptions, $267,675 from DM payments, and $5,502.35 in tips. “Not bad for six hours,” she wrote as a caption. “We broke the fuck out of that OnlyFans record.”

“Crazier than u think DM me,” the rapper’s bio on OnlyFans reads. “I am on here every night responding.” Bhad Bhabie is charging $23.99 a month for a subscription to her account. That includes any ‘premium’ photos and videos that are uploaded to her page. Subscribers are also promised the ability to message Bhad Bhabie, which she seems to be answering herself.

The previous OnlyFans record holder was Bella Thorne, who earned $1 million in her first 24 hours on the platform. She became the most high-profile celebrity on the platform when she joined in August 2020.

What is OnlyFans? Who was the previous record-holder?

OnlyFans started as a premium Instagram alternative to give creators a place to sell access to their work. The service launched in 2016 and has since attracted the attention of influencers the world over. Some other rappers with OnlyFans pages include Cardi B, Trey Songz, Tana Mongeau, and others.

Sex workers have also heavily embraced the platform, since it requires a payment method on sign-up. But some sex workers are critical of high-profile celebrities joining the platform.

OnlyFans creators receive 80% of the revenue they generate on the platform. The maximum single tip amount is $100 for new users and $200 for users who have an account that is at least four months old. Users can spend up to $500 a day on the platform, according to Only Fans.

Bella Thorne charged $200 for three non-explicit photos, prompting OnlyFans to drop what exclusive content can cost after complaints. Thorne has since apologized to the sex worker community, saying she didn’t intend to hurt their livelihood. Meanwhile, Bhad Bhabie just turned 18 on March 26.

“From now on im gonna do whatever the f*ck I want,” the rapper told her Instagram followers on Wednesday. She is the youngest female rapper ever to hit the Billboard Hot 100 charts with her debut single, “These Heaux.” She’s also the youngest artist in the last decade to go platinum with her 2018 hit, “Gucci Flip Flops,’ which features Lil Yachty. Her 2017 single, “Hi Bich” has also been certified platinum.