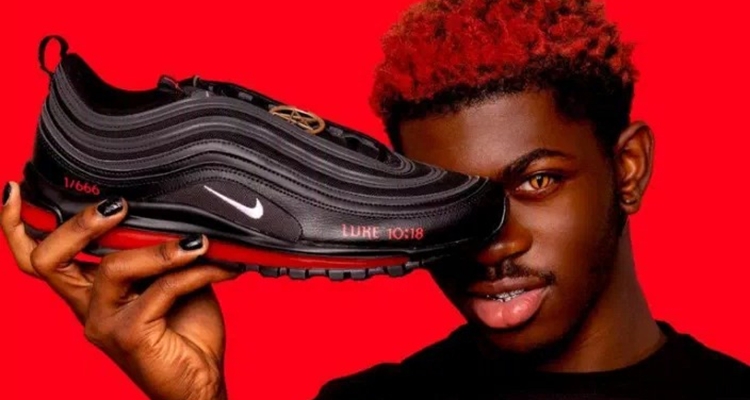 Nike has successfully blocked the sale of Lil Nas X’s ‘Satan Shoes’ with a restraining order.

The U.S. District Court in New York approved a temporary restraining order against MSCHF. That’s the art collective responsible for the customized ‘Satan Shoes,’ which are customized Nike Air Max 97 shoes that feature references to Luke 10:18 and a pentagram pendant. The real uproar started with the marketing, which says the sneakers contain one drop of human blood in each pair’s sole.

“Nike filed a trademark infringement and dilution complaint against MSCHF today related to the Satan Shoes,” a Nike spokesperson told CBS News. “We don’t have any further details to share on pending legal matters. However, we can tell you we do not have a relationship with Lil Nas X or MSCHF. The Satan Shoes were produced without Nike’s approval or authorization, and Nike is in no way connected with this project.”

The court order prevents MSCHF from fulfilling any of the 665 orders taken for the Satan Shoes.

Only 666 pairs were available, with one held back for Lil Nas X to auction on his social media accounts. However, MSCHF’s lawyer says the bulk of the shoes, over 600 pairs, have already been shipped to the consumers who purchased them. Nike’s lawyer says they have “serious doubts” about MSCHF’s ability to ship 665 shoes within the last few days.

Nike says that marketing materials for the Satan Shoes prominently feature the ‘swoosh’ mark. There’s no public disclaimer that the shoes were not produced in collaboration with Nike. Nike argues that consumers are now boycotting the brand online because of the issue. The company wants MSCHF to stop all orders currently in transit and recover them, before they’re placed in customers’ hands.

The uproar kicked off on Monday when a limited drop of sneakers priced at $1,018 became available. The raffle for the final pair of sneakers is on hold because of the pending Nike lawsuit. During their court hearing, lawyers for MSCHF argue that customizing shoes is a form of art. MSCHF also produced a pair of ‘Jesus Shoes,’ which featured a drop of water from the Jordan River. That project prompted no lawsuit, despite making as big a “societal impact.”

“Heresy only exists in relation to doctrine,” a MSCHF spokesperson told CBS News. “Who is Nike to censor one but not the other?” MSCHF says only sneakerheads are interested in customized shoes, and they know they’re not a collaboration between Nike. Nike disputes that, with a picture of Miley Cyrus wearing the sneakers on Instagram.