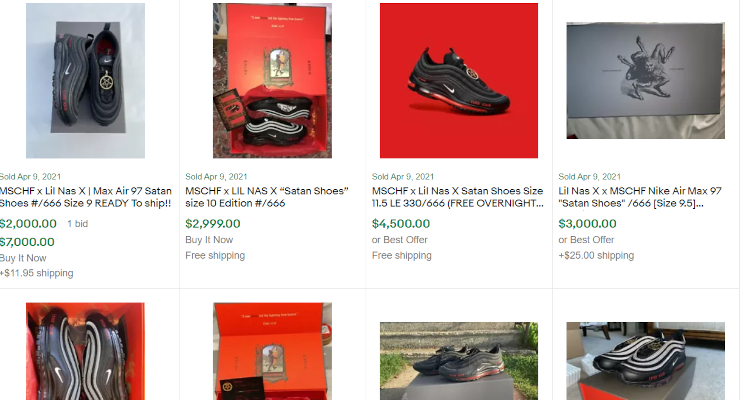 Some sneakerheads are shelling out thousands for the Lil Nas X “Satan Shoes” on Ebay.

The 22-year-old rapper partnered with Brooklyn-based streetwear company MSCHF to craft a total of just 666 pairs of the decidedly controversial sneakers, which are simply modified versions (complete with pentagram zipper pulls as well as a drop of human blood in each sole) of the Nike Air Max 97s.

These limited-edition kicks quickly sold out after becoming available for purchase, despite retailing for a staggering $1,018 per pair – and, as a result, generating a whopping $677,988 for their creators.

But as initially mentioned, footwear fanatics who missed this initial release are shelling out larger sums yet to get their hands on the “Satan Shoes,” to the particular benefit of resellers.

A quick glance at active listings on Ebay reveals that a multitude of profit-minded businesspersons are asking somewhere around $4,000 for a pair of the devilish sneakers, with others yet having (predictably) listed the shoes for $6,666 – or as high as $20,000, for one pair in a size 10.

On the sold side – listings that have already ended, that is – a size 11.5 pair of the shoes brought in $4,500 today, according to Ebay, with several others having generated approximately $3,000 apiece. But the shoe selloff could soon come to a close on Ebay if higher-ups opt to prohibit sellers from parting with the products on their platform.

Building upon the point, Nike promptly denied involvement with the shoes and, almost immediately thereafter, sued MSCHF for trademark infringement. Then, a federal judge yesterday issued a temporary restraining order on the sneakers, ordering MSCHF to halt production. (Most of the aforementioned 666 pairs have shipped, however.)

The parties just recently put the much-publicized lawsuit to rest, and as part of the settlement, MSCHF has agreed to buy back the footwear for the original sales price – though there’s a clear financial incentive associated with forgoing this refund and selling the product on Ebay or elsewhere, needless to say.

At the time of this piece’s writing, it didn’t appear that Lil Nas X – who turned 22 today – had commented publicly on the lawsuit settlement or the considerable resale prices of his “Satan Shoes.”

Back in December, Post Malone’s fifth collaboration with Crocs proved a major commercial success, while Kanye West last summer quietly expanded his Yeezy empire to The Gap with a decade-long deal.