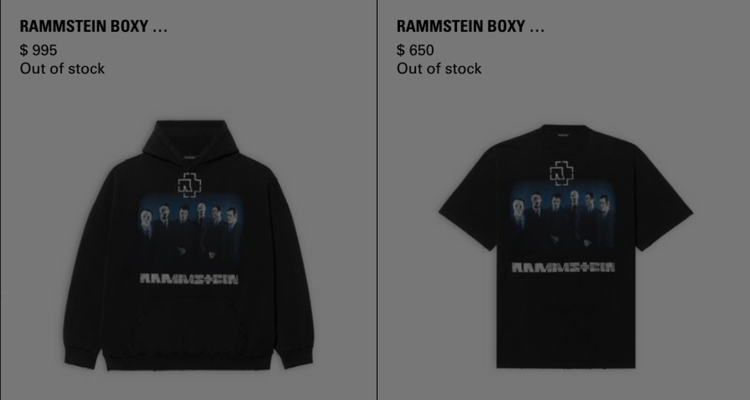 German industrial metal band Rammstein has partnered with Balenciaga for some luxury merch.

The unisex apparel comes with a custom-curated playlist and is luxury-priced. The hoodie cost $1,000 before it sold out, and there’s a fanny pack for $850. The luxury merch features an image of all the band’s members and the Rammstein logo. There’s also a raincoat available for an eye-watering $2,250.

The new luxury merch from Rammstein is in partnership with Balenciaga Music line. It features bands and artists curated by creative director Demna Gvasalia. The designer’s latest interest appears to be heavy metal fashion. Each item has an individually curated playlist for Balenciaga’s Apple Music profile. The 28-song, nearly two-hour playlist offers a look into some of their influences and contemporaries.

Red Hot Chili Peppers, Marilyn Manson, Beastie Boys, Led Zeppelin, Arctic Monkeys, and Lana Del Rey are just some of the songs available on the playlist. It’s an interesting look at what Till Lindemann considers interesting music that isn’t his own.

Of course, Rammstein are always known for their over-the-top concerts and promotions. Till Lindemann’s ‘Tilldo’ vibrators and his ‘golden shower’ wine are just some examples of the crass marketing the band has engaged in to promote its music and albums. At this point, it’s almost expected among Rammstein fans.

But it also raises an important question. If fans are willing to fork over thousands for non-fungible tokens (NFTs), why not real-world luxury merch? It’s a growing segment that brands are using artists to promote themselves and their exclusive ‘drops’ with artists.

Post Malone is famous for his yearly collab with Crocs, which sells out almost instanteously. Recently, Justin Bieber has gotten in on the Crocs love with a special product drop. Even Lil Nas X’s ‘Satan Shoes‘ brought way more attention to his music than if he had dropped the song, “Montero” alone.

Unfortunately, there’s not really anything different or unique about the Rammstein luxury merch – other than the obscene price. It doesn’t come with exclusive access to the band or tickets to any future shows. It’s just $1,000 for a hoodie and a playlist. And you don’t even need to plunk down the money for the hoodie to listen to the playlist.

At least with some of the NFTs you can buy, they offer exclusive real-world benefits once touring is happening again. Luxury merch is a great way to support bands that aren’t touring, if they get most of the proceeds, though.