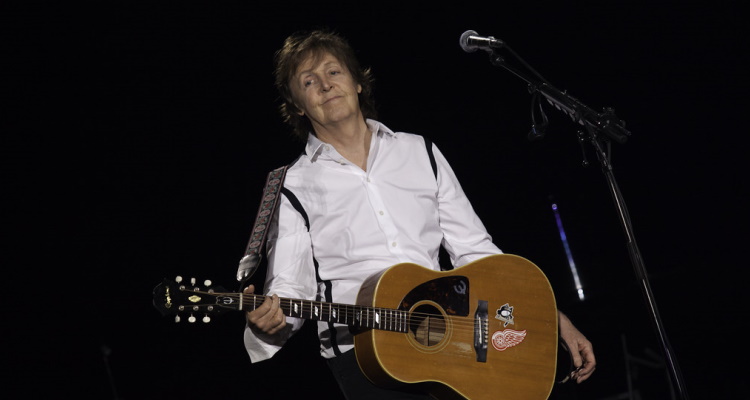 Paul McCartney, one of the 150 or so musicians who signed a letter calling for the UK government to reform the streaming space. Photo Credit: Jimmy Baikovicius / CC by 2.0

High-profile artists including Paul McCartney, Led Zeppelin, The Who’s Roger Daltrey, and Coldplay’s Chris Martin have called on the UK government to implement far-reaching reforms in the music-streaming space.

The formal demand for streaming reform arrived in the form of an open letter (spearheaded by the Musicians’ Union and the Broken Record campaign) as well as a petition, both of which were addressed to Prime Minister Boris Johnson.

Approximately 150 artists signed off on the letter, including Paul McCartney (who criticized streaming compensation rates last month) and the other above-mentioned backers, besides Tim Burgess, Peter Gabriel, Stevie Nicks, Brian Eno, and Nadine Shah, to name some.

Shah, it bears highlighting, appeared before the Digital, Culture, Media and Sport Committee back in November of 2020, as part of an investigation into streaming royalties. During the remote testimony – one of several that the House of Commons’ select committee heard – the “Trad” creator said that she was struggling to pay her rent despite having more than 100,000 monthly listeners on Spotify.

The aforementioned open letter to Prime Minister Johnson promptly takes aim at “streaming platforms, record labels, and other internet giants,” which the authors say “have exploited performers and creators without rewarding them fairly.”

“We must put the value of music back where it belongs – in the hands of music makers,” the text proceeds. “Streaming is quickly replacing radio as our main means of music communication. However, the law has not kept up with the pace of technological change and, as a result, performers do not enjoy the same protections as they do in radio.

To remedy the problem, the message relays, “only two words need to change in the 1988 Copyright, Designs and Patents Act.” This alteration “will modernise the law so that today’s artists receive a share of revenues, just like they enjoy in radio” – putting “more money in the pockets of UK taxpayers” and raising “revenues for public services like the NHS,” according to the document.

Lastly, the letter specifies that “an immediate government referral to the Competition and Markets Authority” is the “first step” towards addressing the “extraordinary power” that certain “multinational corporations” wield, to the detriment of songwriters.

“Ultimately, though, we need a regulator to ensure the lawful and fair treatment of music makers. … By addressing these problems, we will make the UK the best place in the world to be a musician or a songwriter, allow recording studios and the UK session scene to thrive once again, strengthen our world leading cultural sector, allow the market for recorded music to flourish for listeners and creators, and unearth a new generation of talent,” the letter reads towards its conclusion.

The previously noted petition, entitled “Put the value of music back where it belongs – in the hands of music makers,” was launched by Keep Music Alive, an initiative from the Ivors Academy and the Musicians’ Union.

Addressed to the prime minister as well as Culture Secretary Oliver Dowden and Business Secretary Kwasi Kwarteng, the petition (which touches upon the same points as the letter, albeit in fewer words) had garnered about 2,900 signatures at the time of this piece’s publishing.

Apple Music recently stated that it pays one cent per stream – two to three times the per-stream compensation offered by Spotify, factoring based upon Digital Music News’ much-cited breakdown of the Stockholm-based platform’s compensation rate.